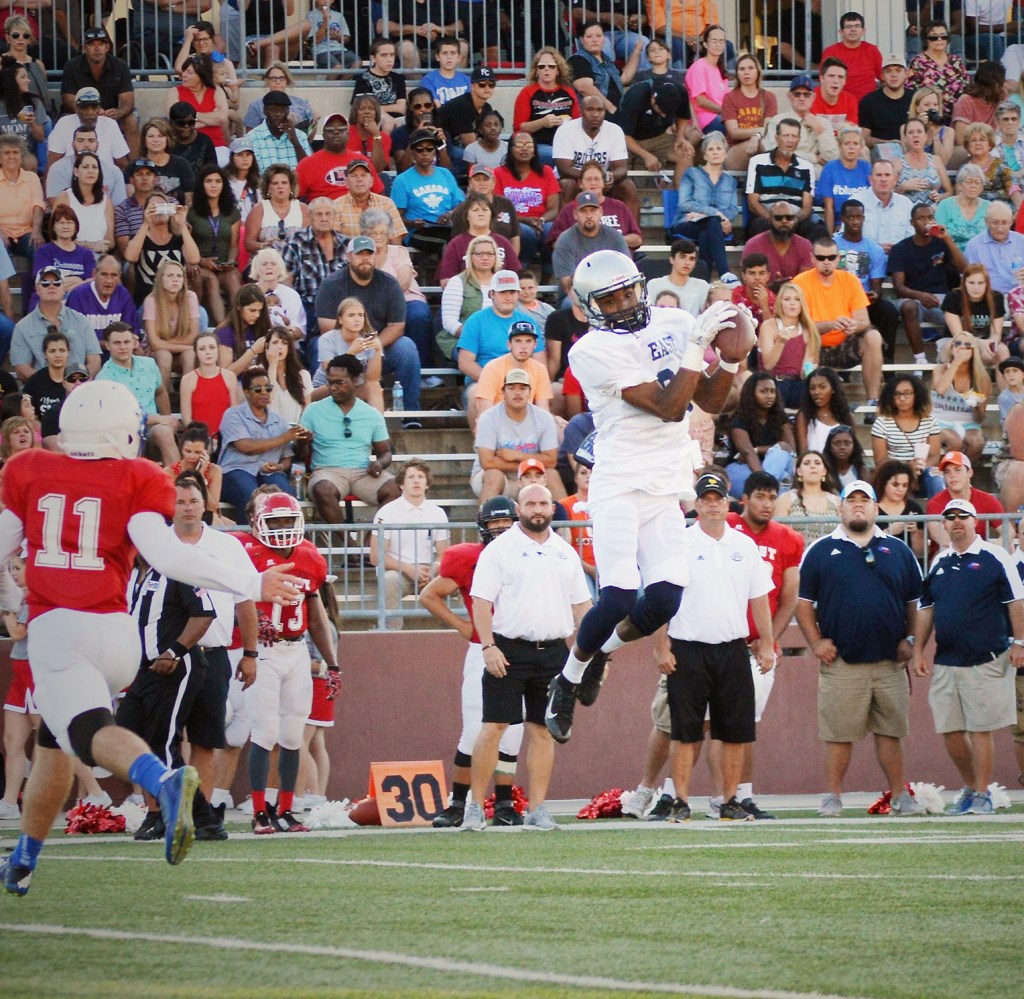 BEAUMONT — All-Star games are usually about honoring those athletes that have superseded their peers at their prospective sports. The Southeast Texas Coaches Association All-Star Football Game is not just a special honor, but for many of players it was their last chance to hit the gridiron while showcasing their skills for friends and family. Some players are still seeking offers from schools to play at the next level and the event gives some last chance exposure.

Orange County athletes notched eight of the roster spots for the East All-Star team and made a big impact in the blowout win. Following a first half with both teams tied at seven points each; the East reeled off 31 unanswered points in the second half to route the West All-Stars, 38-7.

West Orange-Stark standout, Mandel Turner-King, showed out early. The West, running a version of the ‘slot-T,’ drove the ball easily down the field early catching the East off guard with a plethora of misdirection plays. After pushing the ball down to the East 9, Turner-King, was in on many key tackles to halt the West momentum. It would be Turner-King’s’ big sack for an 11-yard loss that stopped the drive giving the East the ball.

The East got on the board first following a scoreless first quarter. Newton, quarterback Brock Barbay led the East offense to a 74-yard scoring drive. Barbay capped the drive with a 32-yard touchdown pass to WO-S wide receiver Jay’len Matthews, who tiptoed the sidelines while burning the West secondary for a 7-0 lead with 11:48 remaining in the second quarter. Barbay ended the night with two touchdowns, which included a 28-yard run late in the game. He found Matthews again on a two-point conversion following the touchdown run.

The West tied the game with seconds left in the first half. Alex Brown of Liberty skipped in for a modest seven-yard touchdown score.

Kirbyville Wildcat Ty Dennis made the most of his totes for the East All-Stars. Following a few big runs, Dennis found the end zone off the left side for a nine-yard touchdown run with Joel Denley of West Brook hammering in the two-point conversion for a 15-7 advantage.

The West All-Stars were unable to get the ball moving the duration of the game with a star-studded East defense that featured one-too many members of the West Orange-Stark Chain Gang. Te’Ron Brown made the longest touchdown of the night when he broke up a play, forced the fumble then scooped up the fumble to sprint 72 yards for a touchdown. The score put the East up 22-7 with 4:21 left in the third quarter.

Martin Brown out of West Brook followed suit on the very next West possession and scooped up a fumble that he returned 70 yards for another big score and to put the game out of reach for the West heading into the fourth quarter. Barbay capped the evening with his 28-touchdown run with Joel Denley diving in for the two-point conversion.

Orange County players showed out one last time for fans with big plays, touchdowns, and sacks. Alex Reed, the lone LC-M Battlin’ Bear on the roster brought home the Defensive MVP for the evening. Maverick Quirante and Seth Smith of Vidor were in on many key plays as well.

The All-Star game marks the official end of the 2016-17′ sports season. Football fans won’t have to wait long for the boys of fall to return with summer practice kicking off beginning of August.