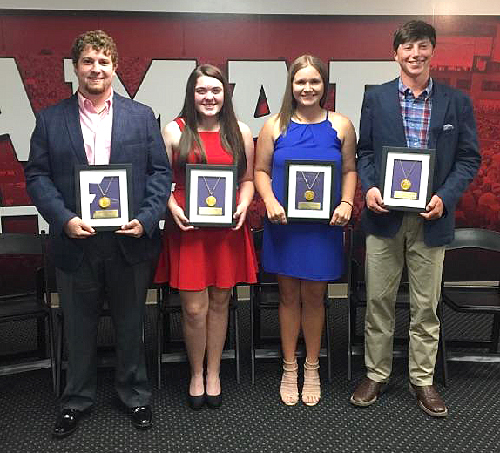 Winners of the Babe Didrikson Zaharias Awards: From left, Character/Leadership Award winners Trey Love of LCM and Mackenzie Sears of Silsbee, and BDZ players of the year Karlei Hemler of PNG and Jonathan Miller of Kelly. (Courtesy photo)

BEAUMONT — Karlei Hemler received four straight invitations to the Babe Didrikson Zaharias Awards dinner, quite an accomplishment in itself.

Taking home the biggest award in Southeast Texas girls golf, however, is much sweeter. To do it twice is just heavenly.

Hemler was named the girls golfer of the year in the area for the second time in three years during Thursday night’s ceremony at the Montagne Center’s Cardinal Club room. Jonathan Miller of Kelly won the award for boys golfer of the year.

Hemler’s second BDZ Award caps off a stellar high school career in which she won the District 22-5A championship for the third straight year. She came in second to Leah Alberto of Kingwood Park in the 5A Region III tournament and was 10th in the state tournament.

When she first made state as a sophomore, she became PNG’s first such qualifier since 1978.

Miller helped the Kelly boys team finish second in TAPPS team standings after winning it last year. He was third in medalist standings.

Miller won the award over Josh Elmore of PNG, Brendan Marley of Nederland and Trent Kizer of Vidor.

Trey Love of Little Cypress-Mauriceville and Mackenzie Sears of Silsbee received the BDZ Character/Leadership Awards. Among the finalists for the boys award was Jadon Bell of Nederland, Jared Dowdy of West Brook and Bryce Shaver of Lumberton. Girls finalists were Theresa Beckett of LCM, Bailey and Hemler.