Sometimes we’ve all just got to get along, even with game officials 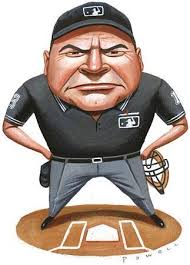 In order to play a game, one must have players. And a ball. And a field or court to play on.

But one item that many people overlook when considering game schedules is availability of officials. And lately, that has often been tricky because of a growing shortage of them.

And for me, covering so many games over the last 24 years, I can certainly understand why, especially after this past school year.

I envy the officials at times, whether it be volleyball, football, basketball, baseball or softball.

I simply could not handle all the “experts” in the stands, no matter how much money was offered. I can honestly say I’ve never seen the movie Jekyll and Hyde but I feel I’ve seen it play out so many times on Tuesday and Friday nights, especially during the 2016-17 campaign.

This past school year, I’ve seen football fans chase officials out in the parking lot. I’ve seen basketball officials and school officials try to break up a brawl in a basketball game between players and parents.

The baseball and softball seasons were just as bad, especially late in the playoffs as expletives were tossed around routinely and parents and fans thrown out because they are so emotionally invested in a child’s game.

Of course, I always hear those familiar lines these days way more than I use to when I started covering sports back in 1993: “You got to call that (expletive) both ways,” an adult fan yells at him from behind the backstop. “That’s terrible! You’re ridiculous! Unbelievable!”

The curse words have ground worse over the years too. Sure, I’ve heard some bad ones, especially from the men but when you start hearing the vulgarity from the Moms, it’s like “Whoa.” I’ve simply heard too much of that, and too me, it embarrasses the kids in the long run and the school you are there to represent.

Officials try not to be intimidated by crowd behavior. However, after all, they are human. Some officials hate to be yelled at and no human likes to be screamed at and called names after every little call.

Some officials possibly make calls by the fact that they were intimidated by a previous call that went the other way. Officials are not suppose to have makeup calls, but I know they do happen.

I’ve witnessed, first-hand, especially baseball and softball officials, make tough calls against teams whose fans and parents have been unruly, just to show them up as well. Saw that way too often, especially in the recent playoffs.

Some parents, realize not all, live vicariously through their children and they’re biased because they want their teams to win and I get that somewhat.

However, there’s a difference between being biased and being unfair when it deals with officials, who are supposed to be neutral. That’s the way you’re supposed to look at it, but some parents don’t get it and never will.

Parents, whatever happens as far as calls go, you have no control over that. Some are going to be good and some bad in different situations. Some calls at the end of games can sting or bring joy to your young athletes.

Sometimes things happen in the heat of the moment and you realize then, sometimes too late, that other plays could’ve been made throughout the game that could’ve helped your team win.

Once an athlete realizes that his parents and coaches are going to blame the officials for his or her failure, that’s very unhealthy at any level of sports and in those kids’ future endeavors, It just creates a wrong mindset.

I think a lot of people these days feel entitled. Sad, but society has made it that way.

Everybody gets a “ribbon” for everything these days. Nearly everyone makes the postseason. The University Interscholastic League has created a monster with four teams making the playoffs in every sport. Sorry folks, way too many, as a lot of districts mostly have six teams in them and a slew of them with just five.

Look at the pro leagues now. Twelve teams make the NFL playoffs and 16 make the NBA playoffs. Watered down for sure.

Availability of referees and umpires has been growing tighter as fewer and fewer of them offer their services. It’s not just happening locally, but also all across the nation. Without officials, games can’t be played, and the shortage is starting to have an effect on schools.

“The average age of an official, if you averaged it across the state of Texas, is 50 to 55 years old, according to a recent study. We’re in trouble in 10 years if it doesn’t get any younger.

The TASO is the governing body of officials in the state of Texas, providing support, resources and training for high school officials across the state. It is an independent organization that works closely with the University Interscholastic League and Texas Association of Private and Parochial Schools, as well as several other organizations.

The TASO consists of more than 150 chapters serving approximately 15,000 members, with chapters for each sport. Each chapter coordinates official assignments in its respective sport: football and volleyball in the fall; basketball and soccer in the winter; and baseball and softball in the spring.

It’s not because the “Help Wanted” sign is definitely not up.

I have spoken with several local officials across the board in all sports. I hear for the most part that they think the younger generation is too occupied with themselves to make some extra dough like they did when they were young, in college and earning some extra bucks for a young family.

Ah, the computer and smartphone generation for sure.

However, the biggest response I’ve received from officials is that most of the young people don’t want to officiate simply because of unruly fans, not worth the abuse and a possible black eye.

So what is the landscape going to look like next year, four years from now, or 10 years ahead?

After all, they’re only games, sometimes we all just have to remember that.