Jerry Gatch: a proud veteran, and a lovable curmudgeon 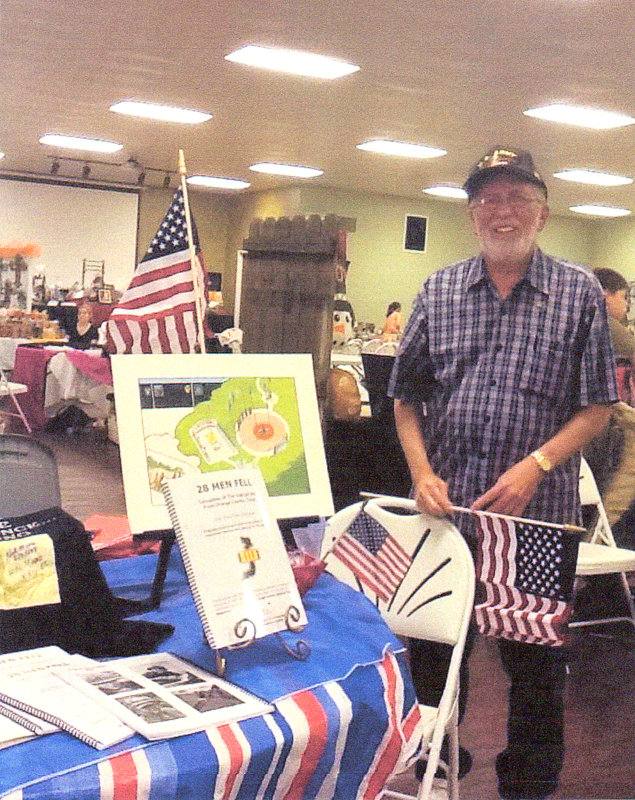 Courtesy photo Jerry with the poster of the memorial and copies of his book 28 Men Fell. He sold the book as a fundraiser for the Orange County Vietnam Memorial.

It has been said a man with many friends is a rich man. Jerry Gatch died a very rich man. Gatch was raised in Orange, graduated in the Class of 1964 from Lutcher Stark High School, was drafted into the U.S. Army, served a tour of duty in Vietnam, graduated from college, and in later years returned to his hometown of Orange.

What he did for his fellow veterans is probably more than any other individual in the area has done. His untimely death has also left a void in the hearts of his many friends. As word of his unexpected, sudden death spread, some of his friends took time to share memories and thoughts.

Lloyd McDonald wrote: “Jerry loved the Class of 1964, but he had a passion for our veterans from the Class of 1964. I was honored to be on the committee to identify all those from our class. Under his direction we honored them at our 45th reunion.”

At the reunion, the class veterans were not only honored, but due to the efforts of McDonald and a few others, a booklet was compiled giving information about the military service of 29 of the 34 veterans who were located. The vets then decided to form the Stark 64 Veterans Association; they wanted to do something for other veterans.

“This (the reunion) only increased his passion for vets even further. He discovered the City of Refuge, the shelter for homeless veterans located near Vinton. He led us in sponsoring a picnic for them and also doing some fundraising ventures for them.

Then his passion went into overdrive as he dreamed of honoring all of those from Orange County who gave their lives in Vietnam. His dream became a reality when the Orange County Vietnam Memorial was dedicated at the Fields of Freedom Park in Vidor in August, 2013,” wrote McDonald.

Learning that the Vidor Lions Club was building a veterans park in Vidor, Gatch contacted them. The Lions allowed the Stark 64 Veterans Association to take over a section of the land for use as their memorial site.

Over the next two plus years, Gatch worked tirelessly to see his dream become a reality. He found materials from concrete to granite plaques, flags, to flagpoles. He found volunteers to do the labor. Tom Windham, a local artist, was brought on board to do his unique method of painting on concrete to paint descriptive murals on the memorial walls. Members of his Class of 1964 helped with fundraising. When funding got tight and things needed to be done, Gatch went into his personal funds and paid what needed to be paid.

The result was a dignified memorial that tells the story of the 28 heroes from Orange County. It is a memorial not only to the 28 Men Who Fell, but also to the man who made it happen.

He was a unique man and somewhat of a character. His friends remembered him in several ways, mostly as a fun-loving guy.

“My fondest memory of Jerry is from elementary days. Our fifth grade class was on the third floor. Jerry and several other boys would walk on the inside ledge by the huge windows which were nearly always open. I can remember several mothers who were there for class parties gasping. We did not pay much attention to Jerry; we were used to his adventures. He was always happy and willing to get into trouble and take others with him,” she wrote.

“Jerry had a group of boys who would leave campus at lunch and “forget” to come back. In reality they were at Jerry Cotton’s house playing cards. Our resident angel, Mrs. Bearden, would call Jerry and get them to come back to school before they were unexcused. We had some great times and really feel like the Class of 64 is family. Jerry spent many hours updating us on classmates and their parents. He was proud of being a veteran and worked tirelessly on the memorial at Vidor. He will be deeply missed and remembered by all as caring, devoted, and a friend to all,” wrote Janet Kay Gholson Morris.

Becky von Schriltz Miller wrote that “Jerry was an integral part of our class—keeping us informed and entertained. We cherished him. He will be missed greatly”

Jerry Cotton remembered the time when he and Gatch had been “across the river”, it was late and Gatch did not want to go home. Cotton told him he was going to visit some friends at Cow Creek and was not going home. Gatch could go to his house and sleep there. Gatch did. The next morning he walked into the kitchen and scared Mrs. Cotton to death, she did not know who the strange boy was in her kitchen looking so disheveled. After she calmed down, she cooked him breakfast and they had a nice visit. “Mother said he was easy to like.”

Pat Butler Dyson said, “He was a curmudgeon, but a loveable one.”

Gatch had a compassionate side as well as the humorous side. When his classmate and close friend Wanda Holts Reinert’s husband, Roger, spent a long period of time in ICU after a heart attack, Gatch was there for her.

“Jerry spent a lot of time nearly every day sitting with me at the hospital, later when Roger died, he helped me get through it. Even though I did not know him very well until he moved back to Orange, he was a close friend that I will miss,” wrote Reinert.

Robert Nelson’s statement pretty well summed up Gatch, “Jerry was an unabashed conservative. Jerry was 100-percent American and a loyal Patriot who will be missed. I wish I had spent more time with him.”

From working on the Vietnam memorial, to keeping his classmates informed, to planning reunions, Jerry Gatch was one of those rare persons who, when he is gone, you feel lucky to have known.

It is fitting that his final resting place will be among hundreds of his fellow veterans. His graveside service will be held at the Houston National VA Cemetery on May 30, 2017.