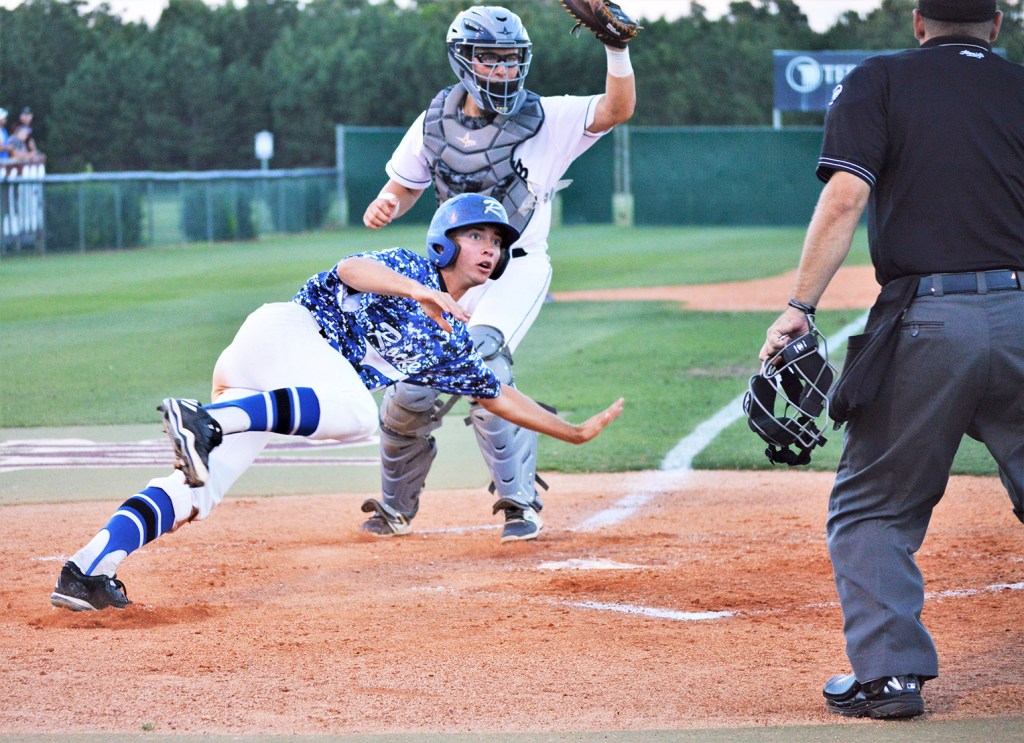 Leader Photo by Ronnie Hughes Robinson's Chandler Kramer reacts after being tagged out by WO-S catcher Chad Dallas on a failed double steal attempt by the Rockets in the third inning.

MAGNOLIA – Striking early in the first two innings, the Robinson Rockets ended a tremendous West Orange-Stark season by downing the Mustangs 4-2 in the Class 4A Region III semifinals Thursday night at Magnolia High School.
The Rockets (29-2) scored a run in the first inning and two more in the second as they were able to fend off the District 22-4A champion Mustangs.
“It was a tough pill to swallow for sure because I know how hard the kids have worked to get to this point,” said Mustang head coach Shea Landry. “It was a battle of two good baseball teams. Hats off to Robinson, they have such a tremendous tradition, We feel like we have a pretty good one going too.”
The District 17-4A champion Rockets got a solid effort from starter Dru Dziedzic and Braxton Ashcraft got the save.
Dziedzic worked 5 2/3 innings, scattering four hits while striking out eight and walking two. Ashcraft went the final 1 1/3 innings, allowing no hits while fanning three.
“The Dziedzic kid had good command and pitched a good game and the Ashcraft came in and threw some heat,” said Landry. “Our kids kept battling though and they never think they’re out of a game and says a lot about them, how they tried their best to try and scrap back.”
WO-S senior standout Jack Dallas wrapped up a great run in a Mustang uniform. He worked the first five innings, allowing four hits while fanning eight and walking three. Ryan Ragsdale tossed the final two innings, allowing two hits while striking out two and walking one.
“Jack gave it all he had and really settled in after the first couple innings,” said Landry. “He’s a warrior, all the things he has accomplished in a Mustang uniform over the last three years has been incredible. Super proud of him and all the kids.”
The Rockets struck for a run in the top of the first inning.
Mason Cooper drew a one-out walk and scored with two outs when Payton Powell slapped a RBI single to left centerfield.
Robinson went up 3-0 in the top of the second.
Cale Moseley and Chris Morrow drew back to back walks and both advanced a base on a wild pitch.
With one out, Jake Strain scored Moseley with a RBI groundout. Cooper then brought in Morrow with a RBI single to left.
The Rockets made it 4-0 in the top of the sixth.
Jordan Rogers had a leadoff double to left centerfield and Rhett Roznos reached on a bunt single. Morrow then laced a RBI groundout as the Mustangs converted a double play but Rogers was able to cross home to score.
The Mustangs finally got to Dziedzic in the bottom of the sixth by scoring a pair of runs off three hits. Dziedzic had only allowed one hit through the first 5 1/3 innings, a Jack Dallas triple in the bottom of the first.
KJ Miller stroked a one-out single to shallow center with one out and swiped second with two outs. Miller raced in to score when Ragsdale belted a double down the third-base line. Chad Dallas answered the call when he ripped a RBI single between first and second as pinch runner Jarron Morris came in to score.
The loss ended one of the best Mustang seasons ever. The 27-4 record is one of the best in school history and of course, so was the perfect 10-0 record in District 22-4A play.
“I know this loss will sting for awhile because the goal is always making the State Tournament when you get this far,” said Landry. “They have nothing to be ashamed of. It’s been a long time since the Mustangs have made the playoffs four years in a row and went perfect in a district that is one of the best in the state. They can look back down the road and remember how great the season was and be proud of it, I know I am.”