Lady Leopards fend off Lady Cards in 9 in Game 3 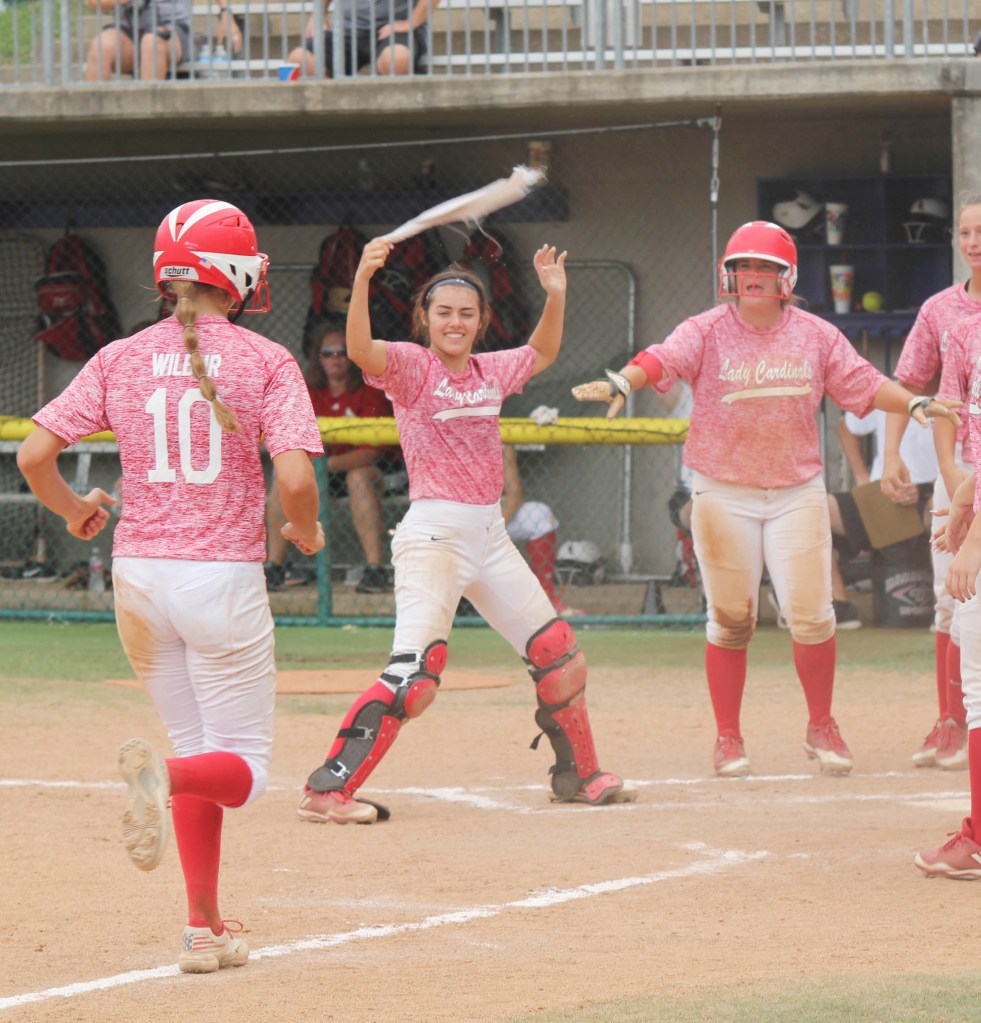 HUNTSVILLE – It was certainly a tough pill to swallow for the Bridge City Lady Cardinals as they battled the Lorena Leopards so hard only to fall just short in Game Three 2-1 in nine innings in the Class 4A Region III semifinals at Sam Houston State University Saturday.
The District 22-4A champion Lady Cardinals (29-7-1) were able to bounce back from a 4-0 Game One loss Friday night and notched a cruical 1-0 Game Two victory early Saturday.
However, in Game Three the Lady Leopards were able to tie the game up in the top of the seventh and scored the winning run in the top of the ninth after a 30-minute weather delay.
The Lady Leopards (27-4-2) got a leadoff single to left in the top of the ninth  by Damiana Longo. Longo eventually made it to second off a Rebekah Moseley groundout and scored the game-winner when Alana Alston ripped a deep double to right centerfield.
Lorena will now move on to face top-ranked Liberty Hill (35-1), which swept Little Cypress-Muariceville 14-6 and 9-0 in their regional semifinal, next week in the Region III Finals with the winner advancing to the Class 4A State Tournament.
The Lorena win offset a brilliant performance by Lady Cardinal junior pitcher Kassidy Wilbur.
Wilbur tossed all nine innings, allowing just six hits while striking out 10 and walking three, However, the Lady Cardinals made four errors behind her. Wilbur pitched all 16 innings Saturday for Coach Kayla Gallardo, showing true grit and determination like always.
Rachel Williams got the win on the hill for the Lady Leopards in going the distance. She allowed 10 hits while striking out five and walking one and her defense made no errors. The Lady Cardinals stranded 13 runners on base as they couldn’t get key hits in key moments.
The Lady Cardinals got on the board first in the bottom of the fifth when Wilbur took a Williams offering and planted over the dead centerfield fence for a leadoff home run.
The Lady Leopards did not counter until they had one out in the top of the seventh. Longo stroked a one-out double to center and was able to dart in to score when Brooke Haberman reached on an error at second as the ball went into shallow rightfield.
The Lady Cardinals left runners in scoring position in five different innings, including the first inning in which they loaded the bases with no outs and came away empty-handed.
Wilbur, Aleah McClanahan, Chloe Halliburton and Meagan Sourdellia all had two hits for the Lady Cardinals. Longo had two hits for the Lady Leopards.
The Lady Cardinals took Game Two with some dramatics, scoring a run in the top of the seventh off Williams.
Halliburton drew a leadoff walk, went to second on a Sourdellia bunt and scored when Natilee Reed cranked a RBI double to right.
Wilbur dominated the Lady Leopards from the mound, allowing a mere two hits while striking out 13 and walking two.

Williams went the distance as well in Game Two as she allowed just two
hits as with five strikeouts and two walks.

The cupboard is far from dry in Lady Cardinal Country next season. The program is losing the services of seniors Sourdellia, Summer Black and Carley Simon and will look forward to the return of third baseman Caitlin Denison, who broke her ankle in the last district game this year along with Wilbur and a slew of starters back in the mix.