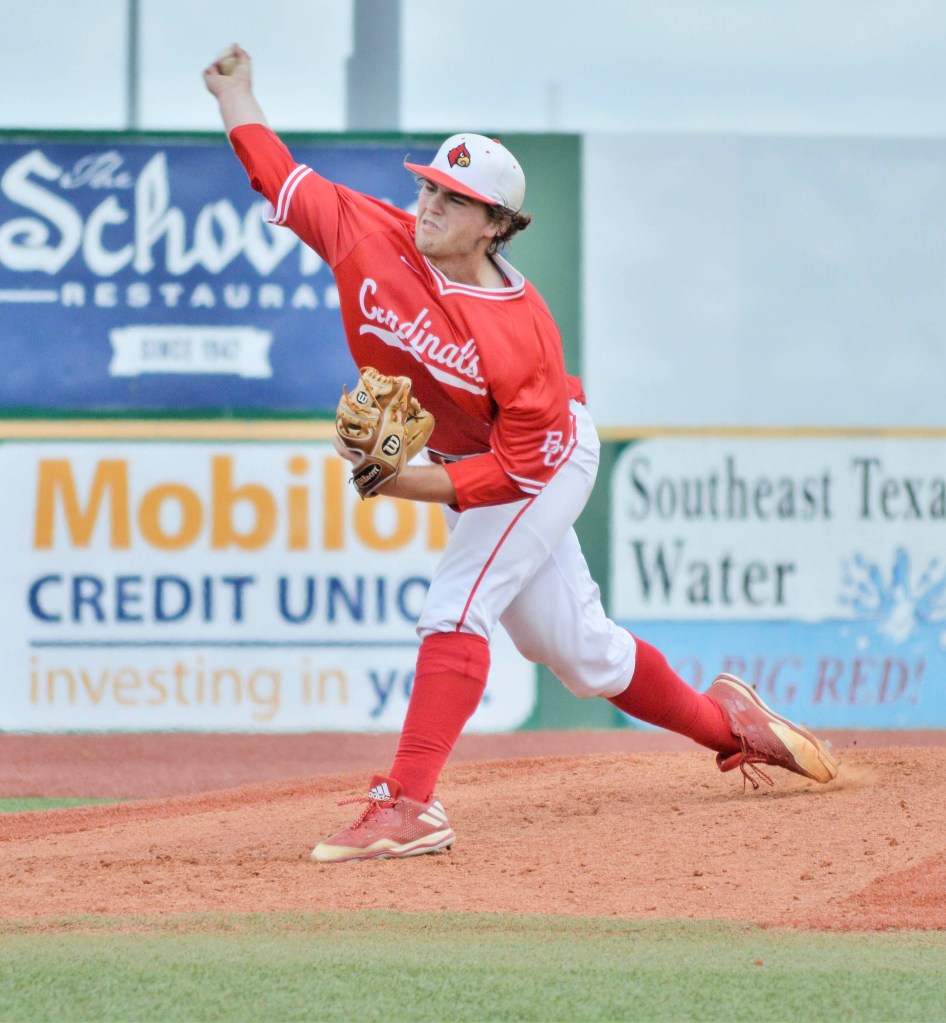 BEAUMONT — Coach Chad Landry’s young bunch was at it again Saturday at Lamar University’s Vincent-Beck Stadium and their magical ride throughout the 2017 postseason continued as they sent District 22-4A Silsbee packing as they captured Game Two of their best-of-three Class 4A Region III regional quarterfinal series with a 2-1 victory after blasting the Tigers 11-1 in Game One Thursday night.

The Cardinals (20-12) scored the winning run in dramatic fashion in the seventh inning. Jacob Goodman got it going with a leadoff double. Brady Coulter ran for Goodman and Gavin Green put down a nice bunt to move Coulter to third and Coulter was able to dart in for the winning run when Silsbee pitcher Noah Whited threw the ball wide for an error.

The Cardinals will now move on to face the China Spring Cougars in the Region III semifinals next week. The Cougars downed Liberty Hill 13-3, 4-7 and 10-0 in their regional quarterfinals.

Both teams were very into this game in front of a large crowd at Vincent-Beck. Anytime a hit or big strikeout happened the benches were jumping out of the dugout yelling and cheering on their team. It was playoff baseball at its finest and the atmosphere felt just like it as both teams didn’t want their seasons to end .

Goodman, in a team game, was certainly the one who stood out for the Cardinals Saturday. Goodman almost won that game himself with his great pitching and the double, which would be the winning run.

Bridge City’s Coach Laundry credited the team’s win to their defense and good scouting report. “Our defense was good today and coach Chris Moore had a great scouting report for us to prepare with.,” said Landry.

The pleasure to watch this playoff game was shown throughout. The seventh inning was tied at 1-1 with both starting pitchers throwing great. Both benches and crowds were very into the game and involved. This is what movies are made of, the chills it brings and memories it will make for all of the players, proving Texas baseball is in a league of its own.

The game was the definition of a pitcher’s duel. Both got into sticky situations and found their way out multiple times to keep the score low and very close the entire game. Whited for Silsbee and Goodman for Bridge City showed up to win and both showed it. Both pitchers finished with six strikeouts apiece.

Bridge City struck first with offense in the first inning. Logan Hamm reached base off of an error, Caleb Dubois and Justyn Romero reached off of singles to load the bases. Kevin Gordon hit a grounder to bring in Hamm at third for the game’s first run as the Cardinals jumped up 1-0.

Silsbee answered back in the top of the fourth inning. Jacob Collins led off the inning with a hard line drive down the right field line for a triple and Spencer Uribe knocked him in on the next at bat with a single to tie the game at 1-1.