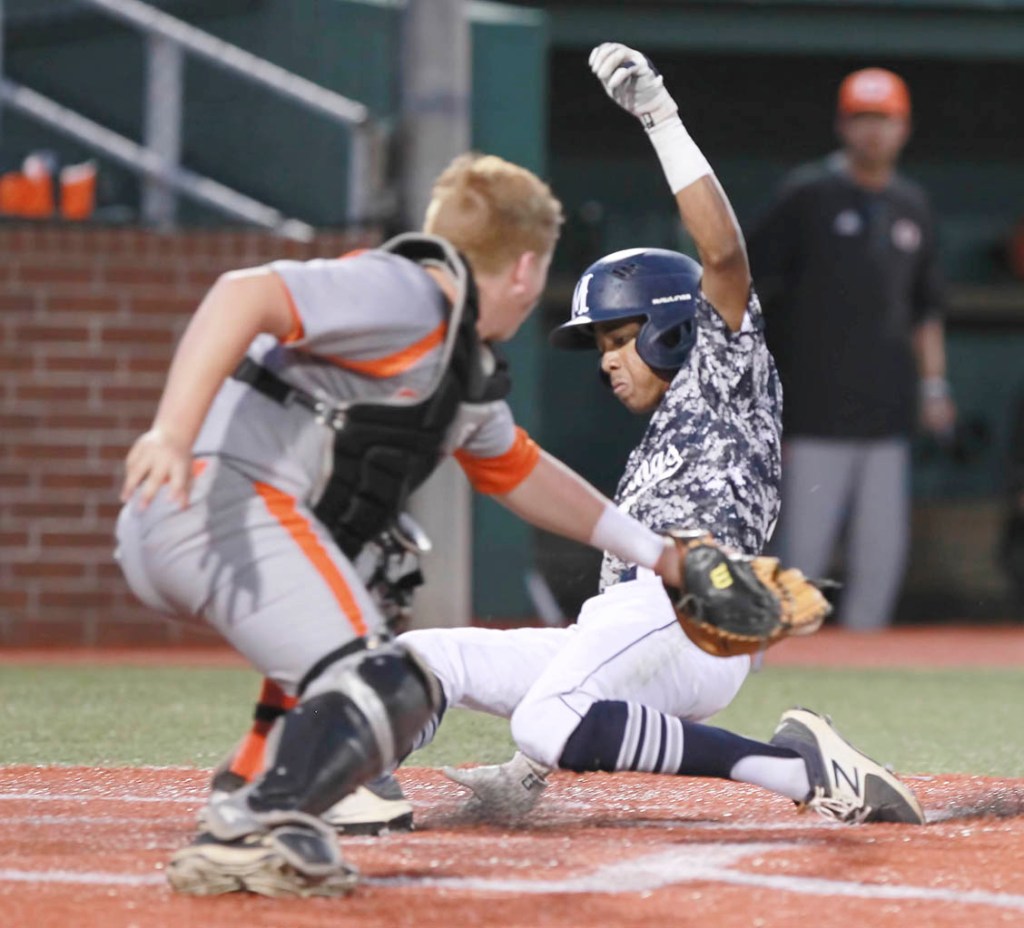 BEAUMONT — They are more friends than foe, but when it came down to the Class 4A regional quarterfinals match-up between the Orangefield Bobcats and West Orange-Stark, it was all about the game at hand.

The Mustangs faced their toughest test of the post season at Lamar University’s Vincent-Beck Stadium, but was able to scoot past the Bobcats 2-0, to advance to the regional semifinals.

The Mustangs (27-3-1) have not loss a game since non-district action and have notched three shutouts in the post season while sweeping all three opponents thus far.
Despite a three-up-three-down start to the game, the Bobcats (18-10) gave the Mustangs a bit of a shock early with Bobcat pitcher Ryon Stubblefield leading off with a single to shallow center field. Unfortunately, the Bobcats were unable to bring a run in after Johnny Armstrong was caught off the bag and thrown out at second base following a fly-out to end the half.  The Mustangs sent three batters up as well and watched them quickly go down on routine defensive plays by the Bobcats.
Orangefield batters produced another scoreless second inning with all batters going down in order. Tre’ Bernard put the first Mustang runner on the bags with a double down the third base line. Te’Ron Brown left Bernard stranded as he took a one-two count and struck out swinging.
Mustang first baseman Kaleb Ramsey led off the bottom of the third with a triple deep down the first base line that was misplayed by the right fielder. Blake Robinson followed Ramsey with a ground out to second that held the scoring run at third. BB Tezeno would bring in Ramsey with a choppy sacrifice bunt to give the Mustangs a slight 1-0 lead after three innings of play. Tezeno finished the night, 2-for-3 with an RBI, triple and a run scored.
Brett Fregia led off the fourth inning for the Bobcats with a double shot down the third base line. The stellar infield play of the Mustangs, however, kept their cool with Ramsey making two big snags at first base for outs. Fregia batted 2-for-3 on the night.
The Mustangs scratched across the final run of the night in the bottom of the fifth inning. Tezeno tripled to centerfield with just one out and no runners on the bag. KJ Miller hit a sacrifice fly RBI to left field that was just deep enough to score Tezeno. Miller went 2-for-3 with an RBI in the quarterfinal round. Mustang batters garnered seven hits in the shutout win.

It would be a defensive showing the rest of the way with both clubs showing stellar mound presence along with big-time infield throws. Jack Dallas picked up his third win of the post season, tossing a complete game with seven strikeouts. He struck out the final four of six outs. Tensions began to boil in the final inning following Jack Dallas’ striking out Stubblefield. The call went in favor of the Mustangs, but both benches scooted out onto the field, but managed to reel back in their emotions before any ejections were handed out.
The final two outs will haunt the Bobcats until next season though.  The tying runner was on first with runners at first and second. Kadeon Evans hit a hard shot to short stop that was nabbed by Miller to throw the runner out at second. The umpires made the call that due to interference by the runner going to third base that Evans would be called out as well at first base to end the game on a sour note for the Bobcats.
The two Orange County clubs showed much class despite the tensions and confusion to end the game. Both teams shook hands and gave each other the much deserved respect for what was a well-played ball game by both clubs. The fans packed the stadium and got the game they all expected which was a close game and pitchers duel as both clubs pitched their ace in the must win one-game series.
The Mustangs will advance to the 4A regional semi-finals against Waco Robinson with the time and place to be announced.