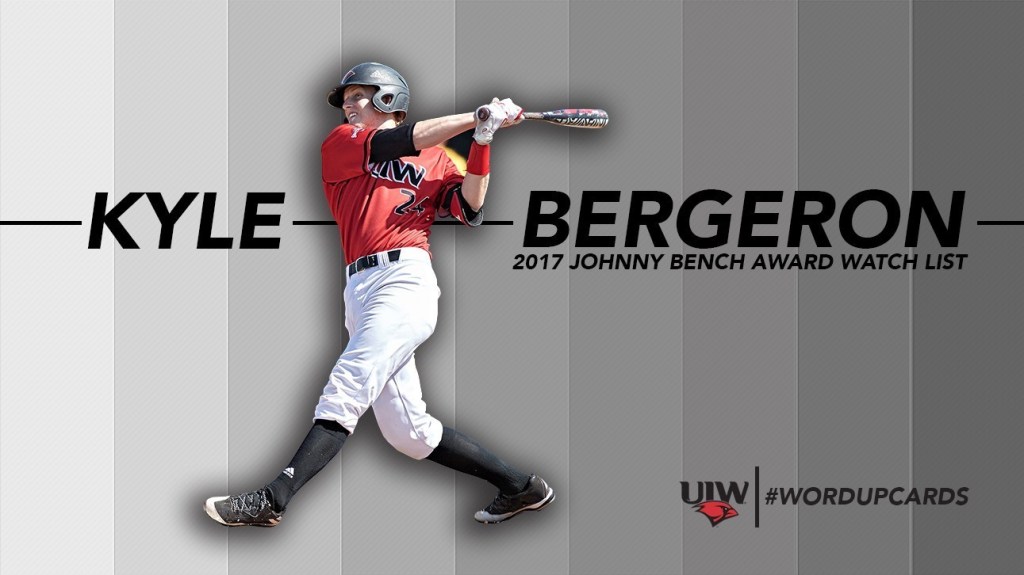 WICHITA, Kan. – University of the Incarnate Word freshman catcher Kyle Bergeron was added to the most recent Johnny Bench Award watch list, released on May 4 by the Greater Wichita Area Sports Commission. The honor is given annually to the top catcher in Division I baseball.

“Kyle has done a great job,” Head Coach Danny Heep said. “He’s thrown a lot of guys out. He’s very good at it. He’ll get better as he gets more mature on the offensive side and he’ll learn over time how to make adjustments. His recognition as a member of the Johnny Bench Award watch list is well deserved.”

Bergeron has been solid behind the play for the Cardinals, throwing out 18-of-49 base stealers, which places him third in the Southland Conference. In league play he has thrown out 11-of-24 base stealers, good for second in the conference. Bergeron holds a .969 fielding percentage, with 196 putouts and 48 assists on the season.

“Originally we brought Kyle in as an infielder,” Heep said. “We knew he could catch, but he was recruited to play the infield. Kyle was thrust into the role of catcher. We’d looked at him at shortstop, but he’s actually a better catcher. He was just a natural and looked like he’d been back there all the time. He didn’t get any work in the fall catching. He just started in January and he’s done a great job defensively. He still needs to make some adjustments on the offensive side, but if he does that, he’ll really be something special. I’m really happy with what he’s done. It’s really taken a lot of pressure off of us.”