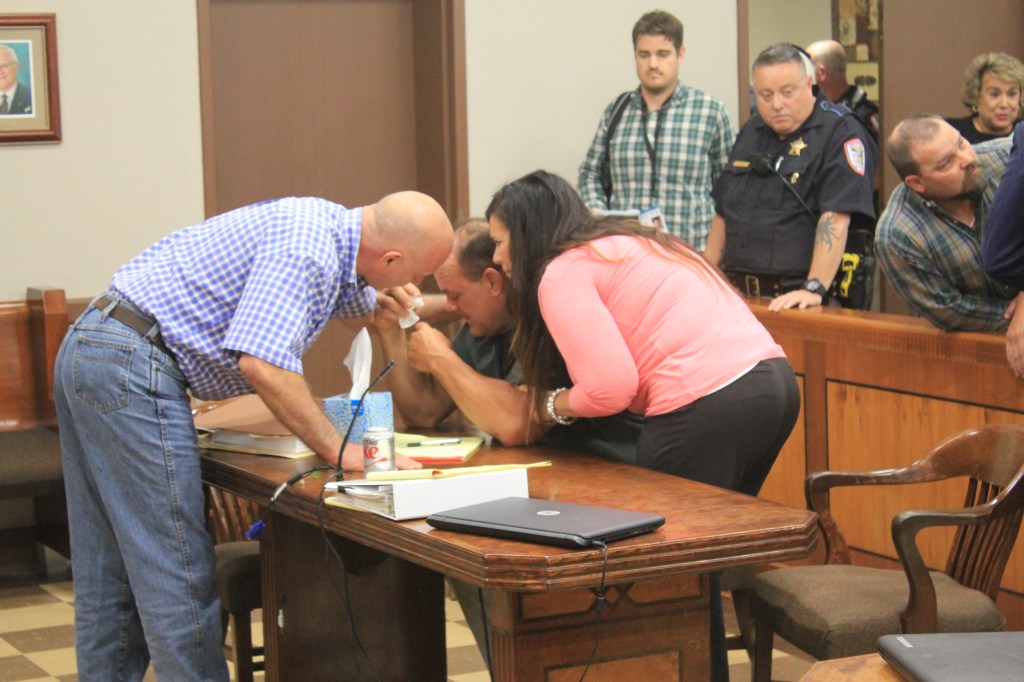 Dawn Burleigh/The Orange Leader Carl Broussard is comforted after hearing the sentencing of 10 years probation for failure to stop and render aid in an auto pedestrian wreck resulting in the deaths of a mother and daughter on MacArthur Drive in 2015.

News of Carl Broussard receiving 10 years probation and $10,000 fine for failure to stop and render aid when LaMya Newhouse, 6, and her mother, Ava Lewis, 25, were hit while crossing the street in the 2200 block of MacArthur Drive on November 2, 2015.

Broussard had initially requested a trial but entered a guilty plea on March 22, 2017 for two charges of failure to stop and render aid.

Neosha Weathers held back tears as she retold the events of the fateful evening as she watched the incident unfold.

“A friend tried to stop other cars from hitting them,” Weathers said in court on Monday. “The baby landed next to her mother but she was moved so she would not be hit again.”

Keiasis Chatman, was crossing the street just ahead of the Ava and LaMya.

“I heard a loud boom,” Chatman said. “When I turned around, I saw their bodies in the air.”

Broussard did stop his vehicle further down the road but never stepped out of the vehicle before continuing the drive to is girlfriend’s residence.

According to a probable cause affidavit Broussard told police that he entered the turn lane to head south on Donnell street.  That’s when he heard a “thud” that caused damage to his front windshield.

Broussard turned himself in the following Tuesday afternoon to Orange Police around 9:45 p.m.

Broussard was released from the Orange County Jail on November 3, 2015 on $200,000 Bond, and then turned in his resignation to the West Orange Cove school district.

Each of the charges are a second degree felony punishable by two to 20 years in prison and a fine of $10,000.

The deaths of Newhouse and Lewis led to an outcry for lights along MacArthur Drive. The stretch of road has come to city officials attention before, when an automobile accident killed another child.

Loleecia Hughey, 2, was killed when a vehicle hit her Nov. 23, 2011, in the 2500 block of MacArthur, the day after Thanksgiving. Loleecia’s death also prompted requests for lights along the street.

Texas Department of Transportation was requested to do a study to determine if more traffic lights or streetlights were needed.

The survey also determined street lights were not needed because of the lack of nighttime accidents. If the connecting cities installed streetlights, TxDOT would not bear the expense of installing or operating them.

Citizens were shocked by the results of the sentencing and questioned the charges. Several persons simply said it was shocking or pathetic.

While those many individuals giving character testimony for Broussard were relieved he will not serve time.

One person, while on the stand, said he would not want to see Broussard sent to prison if it had been his own wife and daughter killed.

“Even if it was my own daughter and wife, I would not want to see him in prison,” David Galley said. “It was a tragic accident. People only know him by this accident not like his family and friends know him.”

The assistant district attorney, during the trial, said Broussard would not be in this situation if he had just stopped.

Meanwhile, the city waits to see how the case of Travis Collins is handled in the courts.

Collins is charged with the deaths of Riley Portie, 54, and his wife Emily Portie, 50, of Orange.

According to investigators, Collins is accused driving drunk on May 24, 2015 in the 1200 block of Park Street in Orange.

If convicted of the second-degree charges, Collins faces up to 20 years in prison for each charge.

Broussard was represented by attorney Paul Fukuda of Orange.

“When an accident is not your fault, you are not charged,” Fukuda said concerning the charges against Broussard. “We try all kinds of cases all the time.”

Broussard will serve the sentences of 10 years probation for each charge concurrently and a $10,000 fine for failure to stop and render aid.