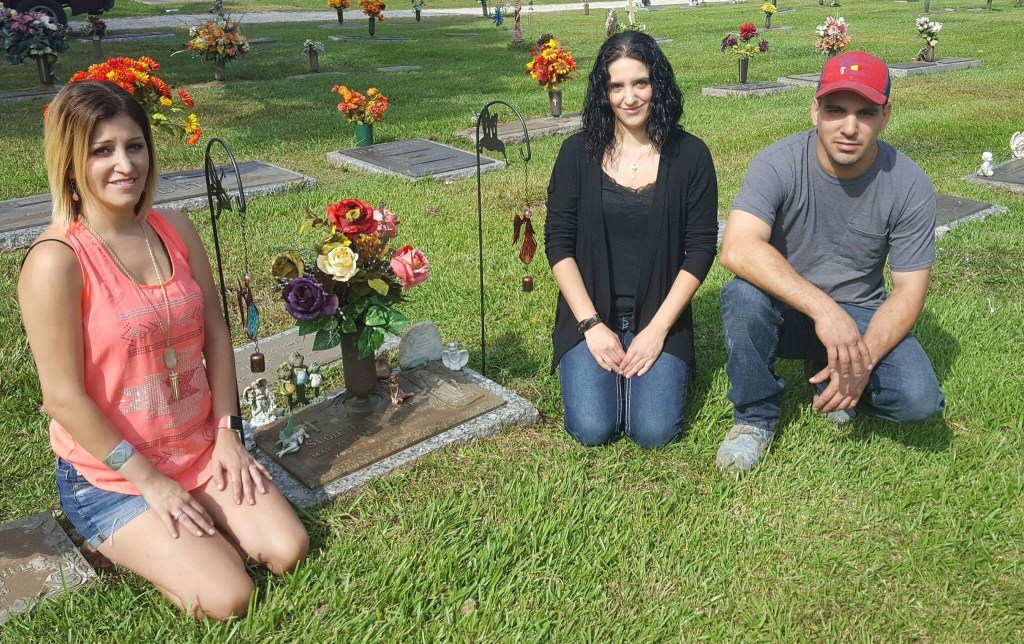 Courtesy photo Sugie Vasquez’s children gather around her final resting place to honor her birthday and Mother’s Day. May 16 is the 20th anniversary of her death, a murder which the suspect, their father, has yet to be arrested for as he has been on the run since the fateful night.

For one family, Mother’s Day is a day of sadness as three hope for closure for the murder of their mother, Sugie Vasquez of Orange.

A warrant for Rojelio Guerra Vasquez was issued in June 1997 for the murder of his wife after her body was found, badly beaten, in a pond in Newton County.

“I use to call twice a day [the police department],” Emily Vasquez said.

Emily had just turned 15 when she lost her mother. Her sister, Amy, was 19 and pregnant with Sugie’s first grand child.

“She knew she had two grand children on the way,” Amy said. “My brother’s girlfriend was also six months pregnant. She was making plans and very excited.”

Being pregnant and losing her mom in such a manor was difficult for Amy.

“All you want is your mom when you are pregnant,” Amy said.

Now 20 years later, the same grandchild is has also lost her dad. He passed away unexpectedly last weekend.

“I never thought at 19 she would go through the same thing of losing one of her parents,” Amy said.

Sugie’s daughters hope to one day bring closure to the case with the arrest of Rojelio Vasquez.

“We hope someone has a heart and help bring closure to my grandmother. She is 81 and has lost two of her children,” Amy said. “We would like to give her closure.”

“Maybe someone will come forward to help locate him,” Emily said. “We have heard rumors of people seeing him.”

Mother’s Day is especially hard for the family as it is also the same month as Sugie’s birthday. She would have been 58 this year.

Vasquez stands at 5’11” tall and weighs approximately 160 lbs. He may have a beard or mustache. He was last seen in Orange but believed to crossed the border to Mexico.

The case was aired on America’s Most Wanted and on a show in Mexico similar to 20/20 in hopes to locate Vasquez.

To date, there are no new leads on where he is located.

If anyone has any information, call the Orange Police Department at 883-1026.