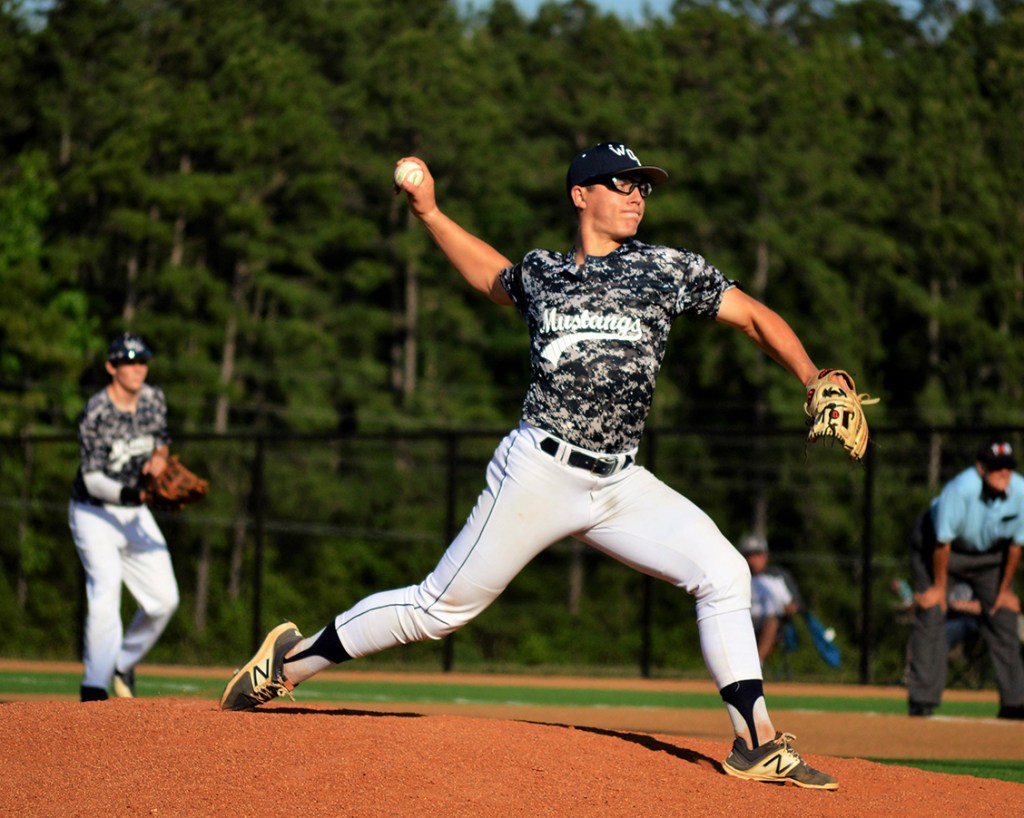 JASPER — After outscoring their opponents 33-1 in their first three playoff games this season the West Orange -Stark Mustangs got a slight reality check against the Tarkington Longhorns in Game Two of the 4A region III area round.

After falling behind early and not taking their first lead until the top of the sixth inning the Mustangs slipped past the Longhorns with a 7-4 win to advance to the quarterfinal round. Chad Dallas pitched a complete game, striking out five of the final seven batters he faced.

After having just two strikeouts and hitting three batters through the first five innings of play, Chad Dallas ended the game with eight strikeouts while batting 2-for-4 and picking up his second win of the post season.

The two squads both started the game stale at the plate both going three-up-three-down while the defenses kept runners off the bags. Trevor Comstock got the Longhorns started with a lead off double in the top of the second inning. The Mustang defense had back-to-back errors allowing John Willis to make it safe to first and Comstock to take third on an infield slow roller. Trace O’Brien stepped up for the Horns’ with no outs and runners in the corners to hit a hard shot to first for the first out, but Mustang first baseman Kaleb Ramsey overthrew second base on an attempt to turn two which allowed Comstock to cross home for the first run of the evening. Willis scored two pitches later with George Molchan hitting a single to left field. Cody Pettit popped out to first base to end the three-hit, two-run inning for the Horns’.

The Mustangs followed suit with a productive bottom half of the second at the plate. Ryan Ragsdale led off with a stand-up double to left field. Chad Dallas and Tre’ Bernard both took free bases after being hit by a pitch following the Ragsdale double. Te’Ron Brown hit into a fielders’ choice that scored Ragsdale for the first Mustang run of the game. The Mustang offense faltered on the bags though with Ross caught off guard on third and Brown thrown out attempting to score after a Kaleb Ramsey single to shallow right field. The Horns’ led, 2-1, after two complete innings. Ragsdale finished a stellar night at the plate going 3-for-4 with two runs batted in and one run scored.

Tarkington again took advantage of a shaky WO-S defense. Nick Meekins led off the top of the third being hit by a Chad Dallas pitch. Comstock singled to left with one out and Willis loaded the bases after being hit by a pitch. Trace O’Brien extended the Longhorn lead to 3-1 after an RBI single to center that scored Comstock. The Mustang defense came alive with Molchan at the plate. BB Tezeno ran down Molchan’s fly ball to shallow right and rifled it to first base to catch O’Brien off the bag for a nine-three double play to end the top of the inning.

WO-S kept the game just close enough that they were able to hang around for the come-from-behind win. The bottom of the third the Mustangs scratched one run across with Ragsdale batting in Tezeno to keep the Stangs’ within one run heading into the fourth inning.

Both clubs battled back and forth matching each other with a two-hit, one-run inning. Blake Robinson knocked in Te’Ron Brown to tie the game for the Mustangs after four complete innings.

Jack Dallas ignited the crowd and the Mustang offense with a lead off double to start the fifth inning. Ragsdale singled to center to score Jack with Chad Dallas hitting a single moments later to score Ragsdale from third base. Bernard capped the lead-changing inning crossing home after an RBI single from Brown. The Mustangs held to a 7-4 lead following five complete innings. Jack Dallas finished 2-for-4 batting with two runs batted in and one run scored.

Chad Dallas and the Mustang defense made quick work of the Longhorns in the final two innings as the Horns’ seemed to run out of steam after a hard fought battle through five innings.

“We knew they’d be competitive, because they finished second in their district,” said WO-S head coach Shea Landry, “Our district has prepared us for games like this. We have a very tough district and you can see why with three teams in our district moving on next week”

The Mustangs will prepare for a 4A region III regional round showdown against cross town rival Orangefield Bobcats next week. The Mustangs swept the Bobcats during the regular season, but the Cats’ have gained momentum after knocking out a district champion in Lufkin Hudson, in the bi-district round and ousting Hardin Jefferson in the area round. The time and place of the games are still to be determined, but you can guarantee the two Orange County teams will jam pack the stands for what will be a big test for both clubs.

“It doesn’t matter what happened during the regular season,” said Landry “Orangefield is still in the playoffs for a reason and they’re a heck of a ball club.”