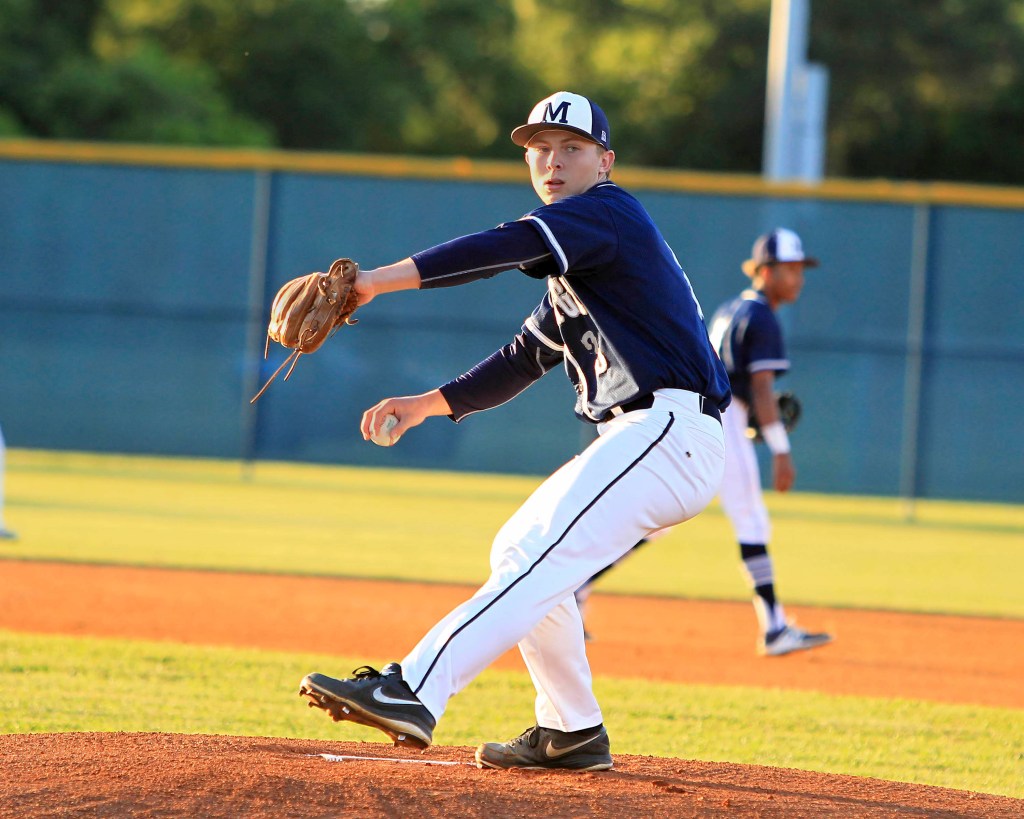 BAYTOWN — After cruising past Diboll in the bidistrict round of the Class 4A Region III playoffs, the West Orange-Stark Mustangs collided with the Tarkington Longhorns in the area round. The Mustangs again made it look easy taking game one from the Longhorns with a 13-0 win at Baytown Sterling Friday night.

The Mustangs got the bats moving early after the defense quickly sat down the Longhorns to follow. BB Tezeno led off with a single to put the first runner on the bags. Jack Dallas brought Tezeno home with a single following a KJ Miller strikeout. The Mustangs left one runner stranded with a 1-0 lead after one complete inning.

It was a defensive effort for both squads in the second inning. The Mustangs brought four sticks to the plate, but would leave Blake Robinson stranded after he hit a single that slipped past first and second. The Longhorn bats didn’t muster much more after Jack Dallas hit the lead off batter. The Horns’ had runners on the corner, but Dallas struck out the next two of three batters to get out of the jam. Jack Dallas threw the complete-game shutout with eight strikeouts on the night while batting 4-for-5 with three runs batted in.

The Mustangs recovered from a tough second inning with a big top of the third. Jack Dallas notched his second hit of the night with a rip-shot up the middle past second base. Ross would come in to pinch run for Jack and following a Ryan Ragsdale strikeout, Chad Dallas, hit a double down the left field line to extend the Mustang lead to 2-0. Tre’ Bernard notched an RBI double of his own to cap the scoring for the Mustangs as the Mustangs led 3-0 after three complete innings. The Mustang defense handed the Horns’ a one-two-three bottom of the inning.

WO-S didn’t let off the gas in the top of the fourth inning. Robinson managed to hit a high pop-fly that he was able to outrun to first base to lead off the inning. Tezeno put down a sacrifice bunt to move Robinson to second base. KJ Miller stepped to the plate with one out and a runner in scoring position. Miller launched a deep triple to left field that scored Robinson. Jack Dallas zipped another single past second base to score Miller with the next at bat as the Mustangs led 5-0 after four complete. Robinson ended a stellar night batting, 2-for-3 with two runs scored.

The Mustang infield showed just how dangerous they are. They put away the Longhorns with three consecutive three-up-three-down innings. The Mustang bats returned to the plate quickly with a 5-0 lead after five innings.

Robinson led off a busy sixth inning for the Mustangs with a walk. The speedy Miller followed with an infield single that scored Robinson just a few batters later. Jack Dallas took a full count pitch for a ground out to shortstop, but Miller scooted over to third base. Bernard stepped to the plate with two outs and runners on the corner with Miller at third and Ross pinch running for Chad Dallas at first.

Bernard ripped a hard shot to short that scored three runs and he rounded the bases to third after two Longhorn errant throws to put the Mustangs up 9-0 after six complete innings. Miller finished the night 2-for-4 from the plate with a walk, RBI triple and run while making stellar infield throws on defense.

The Mustang defense again kept things going with three quick outs. Chad Dallas threw out Nick Meekins at first base on an attempted steal for the third out of the inning. Tarkington had no answer for the Mustang defense.

Jack Dallas struck a two-run single in the top of the seventh to score Miller and Robinson for an 11-0 Mustang lead with the Longhorns changing pitchers with two outs and two runners on the bags. Chad Dallas knocked in the final two Mustang runs and ended the inning attempting to take third base, but not before the Mustangs scratched across four more runs in the final inning.

Game Two of the series will be today at 4 p.m. at Jasper High School with Game Three to follow if necessary.