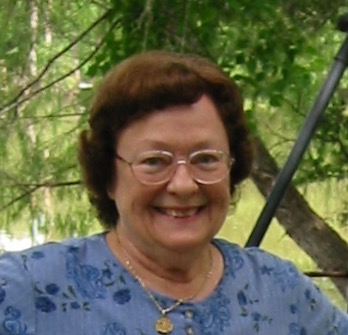 Marguerite Eleanor Austin (93) joined the love of her life, Mildred, in heaven on Friday, May 12, 2017. Margy, as she was better known, was born in Houston, Texas on March 17, 1924 to Elmo and Annie Austin. In her teen years, Robert Williamson came into her family as her step-father for the rest of her life.
Margy was a dedicated nurse having graduated in 1946 from Hermann Hospital School of Nursing. One of her early jobs was as the company nurse for the downtown headquarters of Gulf Oil Company but the majority of her time was spent as a school nurse (22 years!) mostly in Spring Branch ISD at Spring Woods Jr. High.
Always a beauty, her class yearbook for Nursing School had the following poem beside her picture:
Sophisticated Margie
Is our Lauren Bacall,
With her hair and her aire,
Going sway down the hall.
In 1948 she caught the eye of Mildred Hausinger and they spent the next 64 years together until Mildred’s passing. They spent most of those years in Houston but retired to Somerville. Now they are reunited in heaven to continue that great love story.
Through that relationship Mildred’s sister, Kathy Edmondson, came into Margy’s family, including living in Somerville and taking care of her in her final years.
While living in Somerville they traveled extensively and made many friends including Mike Jackson & Tom Spellman who became caregivers for both of them in their final years.
Although Margy suffered from Lewy Body Dementia and Alzheimer’s for over 7 years, her smile and spirit remained beautiful. Helped immensely by the loving and supportive care of many employees of St. Joseph Manor, especially Station 2, who are too many to name but hold a special place in our hearts. In her final months the wonderful crew from Hospice Brazos Valley joined her care team and for that we are thankful.
Margy was preceded in death by her parents Elmo V. Austin, Annie Reneau Compton Austin Williamson and Robert C. Williamson. She is survived by her cousins Margaret Ann Lilek and Judi Prangley of Illinois.
Margy requested no services but if you would like to honor her memory you can support her love of animals with a memorial to your local animal rights or rescue group, Alzheimer’s organization or the wonderful crew at Hospice Brazos Valley.
Family to have a private service at a later date.
Arrangements have been entrusted to Strickland Funeral Home in Somerville. We invite you to visit our website at www.stricklandfuneralhomes.com and sign the online register book.