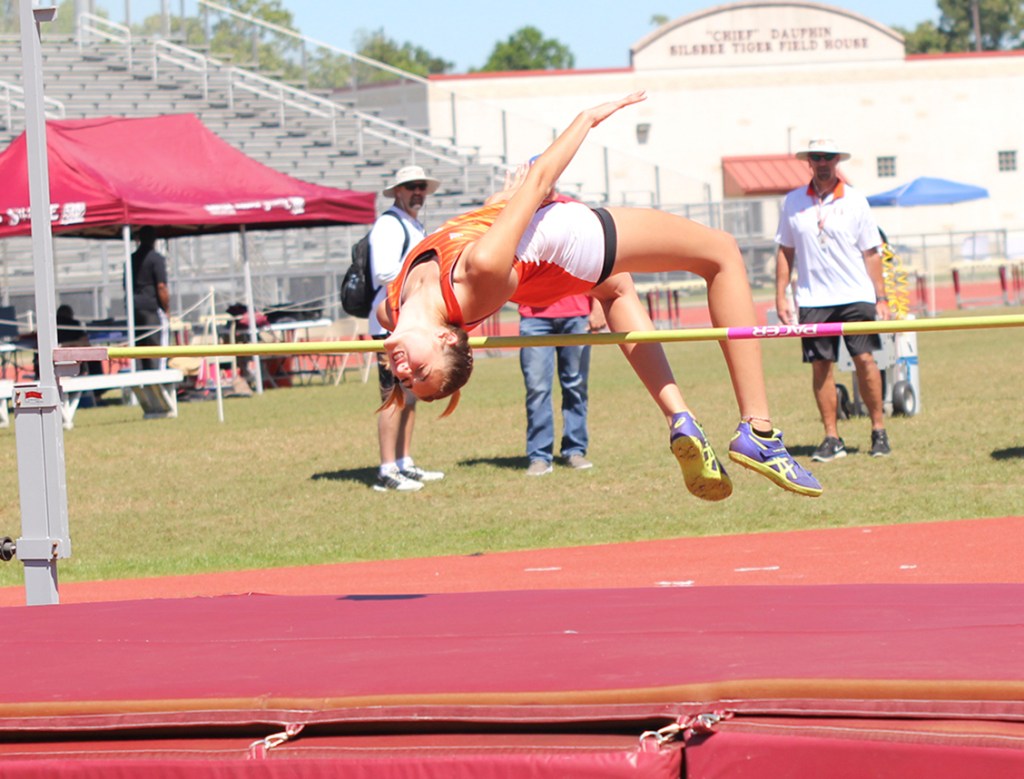 Leader Photo by Van Wade Orangefield's Bailee Click will compete in the high jump at State this week.

Five Orange County tracksters will try to accomplish the feat in the Class 4A Division as District 22-4A will be represented well across the board.

Peveto won the 3,200 meters and the 1,600 meters at the 4A Region III Track Championships last week.

Going into the state races, Peveto ranks fifth as far as regional times go among the nine competitors. Melissa’s Elijah Mackey had the best regional time of 9:41.25 while Levelland’s Isaac Vargas had the second best time of 9:44.14. In the 1,600 meters Peveto has the eighth best time with a 4:37.52. Levelland’s Vargas ranks first with a 4:28.53 while Melissa’s Mackey is second with a 4:29.58.

West Orange-Stark’s Jared Dupree will be going for another medal again this year after collecting a second-place silver medal in the high jump last year.

Dupree won the Region III Meet with a 6-8 effort, which ranks first going in, and has went 6-9 this season. Vernon’s Anthony Garza has went 6-7 with a couple more athletes, Navasota’s Ronnie Jackson and Stephenville’s Blake Aragon, have gone 6-6.

Dupree will compete at 3 p.m. Friday.

Orangefield’s Brooklyn Goldsmith is back at State again this year in the pole vault. Goldsmith went a Southeast-Texas leading 11-3 at regionals to place second. Taylor’s Anna Cathryn Griffith leads the field with a 11-6. Goldsmith, Wimberley’s Haley Schake, La Vernia’s Ashton Moon and Lorena’s Tiffani Peacock all went 11-3 at regionals. Goldsmith will compete at 8:30 a.m. Saturday.

Orangefield high jumper Bailee Click will head to state after equaling her season-best jump of 5-4 to place second at regionals.

Argyle’s Abbi Neece and Glen Rose’s Ally Andress lead the field with 5-6 regional jumps while Huntington’s Torie Comeaux has gone 5-5. All nine competitors have went at least 5-3 so it should be a great competition. Click will participate at 1p.m. Friday.

LC-M’s Trey Guillory will be making a run for a medal as well in the triple jump. Guillory placed third at regionals with a season-best 46-2 ¾ effort and ranks sixth going into the field.

Waco La Vega’s Sir Morgan Loudd leads the pack with a 48-3 while Atlanta’s Trin Taylor ranks second with a 47-1 ¾. Guillory will compete at 10 a.m. Saturday.

Hamshire-Fannett’s Jessica Nevils will be in two events as well as she ranks second in the 300-meter hurdles with a 44.81 and fourth in the long jump with a 18-5 effort.