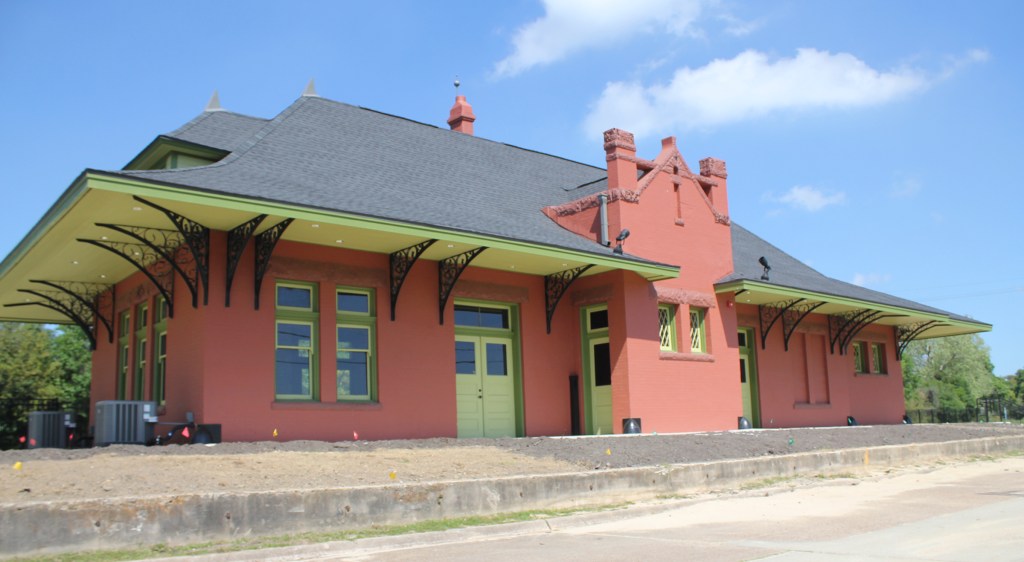 Four years and a great deal of hard work, the Orange Train Depot is ready to show its true beauty to the residents of Orange on Sunday.

Southern Pacific Depot, circa 1902, once faced an uncertain future as each year and storm brought further damage to the historic building.

Then, along came Carrie Joiner Woliver, a former resident of Orange and author of the book The Train Stopped in Orange: A Captivating Family History Revealed through 1917 Texas Diaries.

The book was based on the diaries of Woliver’s grandparents and in which the railroad and depot had played an important role.

Woliver, with her husband, Ron, purchased the building and founded the non profit organization – Friends of the Orange Depot (FOOD).

FOOD worked relentlessly over three years with fundraising events to secure the funding needed to restore the depot.

During the demolition stage, the workmen discovered the beautiful windows with cross hatching, which were saved, and also a Queen Anne period built-in mahogany desk that was used by the ticket agents. The floors and the brick walls told the story of the changes made to the building throughout the years. Before integration in the 1960’s, the depot had white and black designated waiting rooms. Visitors can still observe on the floor where they removed the wall between the black waiting room and the freight room when integration was mandated. Now that room will serve as the larger exhibit space, which can also be transformed for special events and conferences.

The ticket office will be used for the museum gift shop where visitors can buy souvenirs. In the hall an original Southern Pacific Emblem was installed in the floor, as a reminder of the depot’s history.

Parking will be available on Elm St. and part of 11th, and overflow will be on a lot across the street from the depot, with entrance on Elm.

During the tours, visitors will learn facts about the depot’s history and interesting details that the workers discovered during the demolition phase, see the built-in original Queen Anne desk, and original windows and wall markings that tell about the different phases of depot history.

Fundraising is continuing for the museum exhibits which will feature four industries that propelled Orange in the past century: railroad transportation, lumber, shipbuilding and petrochemicals. Since the building is designed to be a multi-purpose facility, there will be spaces in both large rooms to rent for meetings and special events.