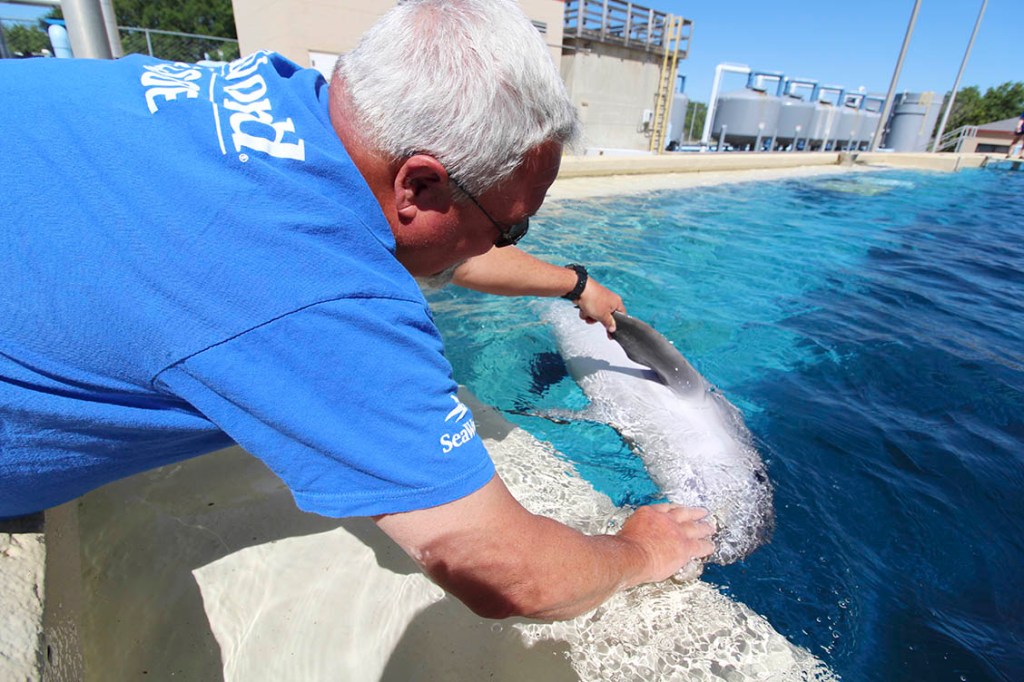 A young dolphin named "Zip" that was impacted by a toxic algae event in South Texas is given a routine exam at Sea World San Antonio. (Photo by Chester Moore, Jr.)

The oceans are the world’s last great frontier.

Covering more than 70 percent of the planet there are many things even the most well-researched scientists don’t know about life beneath the surface.

What the general public learns about the ocean often comes from television, the Internet, books and facilities like Sea World where we have the opportunity to come in contact with some of these creatures.

Last week I got an exclusive behind the scenes look at Sea World San Antonio and learned that what you see in the shows and aquariums is only the tip of the iceberg.

For example did you know they are heavily involved in rescuing injured and sick marine mammals along the Texas coast?

Readers will likely be familiar with the story of teens from Orange County shooting a dolphin with a fishing arrow in Cow Bayou. What was not as widely reported is that a younger dolphin had followed that larger male into the system and had become disillusioned due to its time in fresh water.

After deemed releasable, the dolphin was brought to Sea Rim State Park and put into the surf.

“It’s an incredible feeling to get to release a dolphin like that. Once the designation is given to us that an animal can be released we are always relieved because that is certainly the option we desire,” said Chris Bellows VP of Zoological Operations at Sea World San Antonio.

But some dolphins are not able to be released.

“When a dolphin or any marine mammal has been rescued by a federally authorized organization the first goal is to get that animal back out to the wild. Sometimes that can’t happen. NOAA receives information from veterinarians and care givers and if the recommendation is to provide long term care NOAA makes that decision,” Bellows said.

“Once the decision has been made to care for an animal for the rest of its life the goal is to place it at a facility with like species. NOAA sends out a questionnaire to these facilities asking if they would be willing to care for the animal. They also check to make sure certain criteria is met. At SeaWorld San Antonio we currently have five dolphins that were placed with us by NOAA. Our goal is always to get the animals back out to the wild but we will provide a home for those that can’t be returned.”

Me and my wife Lisa got to meet several of these amazing animals and were blown away by the level of care and attention given them.

The Sea World San Antonio team has also been involved in rescuing a wayward manatee that ended up in a power plant canal in Trinity Bay and for the last several years have been actively involved in helping rescue sea turtles shocked by strong cold fronts along the Laguna Madre region of the Texas Coast.

The facility’s aquariums are notable for their diversity of fish including sharks.

While touring a laboratory where several species are being raised in captivity we saw the intricate process of not only rearing the fish but the tiny marine creatures they feed on. Aquariums are working hard to captive raise as much ocean life as possible and even sharks which are extremely difficult to breed in captivity are being produced. We saw several small sandbar sharks in an outside enclosure that are part of a captive breeding program.

Ocean life is not the only thing the park is involved with. They have a number of outreach animals chiefly made up of creatures that were injured and could not be released back into the wild.

We got to meet “Star” a beautiful bald eagle deemed non releasable after an incident in Florida and a gorgeous and very vocal barred owl found eating sandwiches in a park where it had become accustomed to people in a very unhealthy way.

“These animals once deemed non releasable are used when give to us to help spread the message of wildlife conservation and inspire people to care about wildlife,” said Angie LLanas Senior Animal Ambassador.

All told Sea World parks have come to the aid of 28,000 ill, injured or orphaned animals in need of expert care. Whether is bottle raising baby manatees who lost a mother or releasing injured and rehabilitated sea lions back to the Pacific they have been heavily involved.

In my career as a wildlife journalist I have been able to go behind the scenes at many facilities and am always impressed with how much actually happens that the general public never sees. In this case there is much to see and much to appreciate at a place many of us Texans enjoy visiting.

Each time we glance at the sandy green waters of the nearby Gulf of Mexico or perhaps vacation in the crystal clear Caribbean we should take time to ponder about the incredible biodiversity that exists there. Although we will never see most of it there are a host of creatures that need our good stewardship and appreciation.

I spend a lot of time in the nearshore Gulf out of Sabine Pass and see dolphins on virtually every expedition. I wonder if I have ever caught a glimpse of the young one rescued by the team mentioned at the beginning of this story. It is alive because a group of people cared enough to give it a chance.

I of course will never know but it is interesting to ponder that the selfless actions of people who care about the ocean’s inhabitants kept the local Gulf’s ecosystem a little more intact.

That is truly inspiring.

(To contact Chester Moore, e-mail him at chester@kingdomzoo.com. You can hear him on “Moore Outdoors” on Newstalk AM 560 KLVI or online at www.klvi.com.)