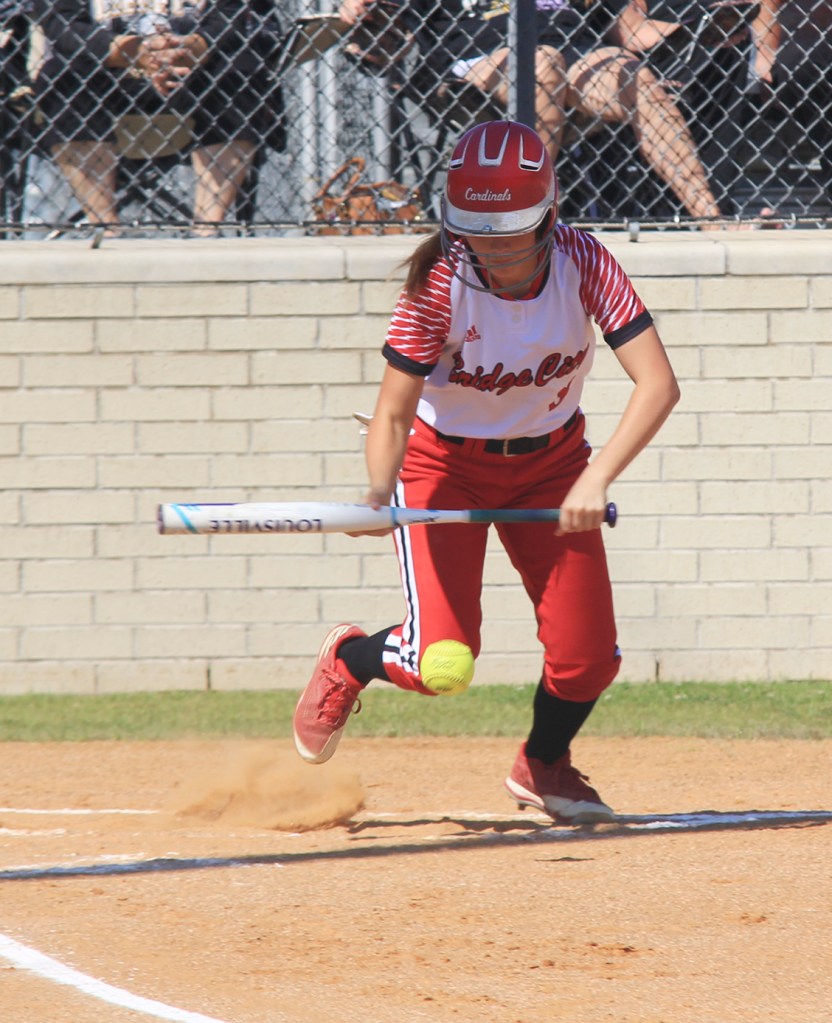 PORT ARTHUR – After a tough outing in Game One, the Bridge City Lady Cardinals meant “business” Saturday as they took down the Liberty Lady Panthers 8-1 and 5-1 in the Class 4A Region III area round at Port Arthur Memorial High School.
Lady Cardinal ace Kassidy Wilbur gritted it out to capture both wins on the hill.
Wilbur scattered five hits while striking out nine and walking two in the decisive 5-1 Game Three win.
In Game Two she fanned 15 while allowing six hits and walking one.

In was a nice bounce back for the Lady Cardinals, who fell to Liberty 4-3 in Game One Friday.

“We just were not ourselves Friday night and the kids proved how they could play today and played Lady Cardinal softball,” said Lady Cardinal coach Kayla Gallardo. “Kassidy was a true warrior out there tonight. She tossed three games n a span of less than 24 hours. She has great stamina. She picked up a lot of strikeouts but she also received good defense behind her today.”

The Lady Cardinals (26-6-2) will move on the face Hardin-Jefferson in the regional quarterfinals next week. H-J defeated Orangefield 6-0 Friday night.

“We’re very familiar with Hardin-Jefferson,” said Gallardo. “They have a tough team and good pitching. When you reach the third round, everyone is pretty good, we just have to go back to practice and work hard and try to keep this going.”
The Lady Cardinals went up 1-0 in the top of the first in Game Three as Wilbur had a leadoff double to left, went to third on an Abby Anderson groundout and scored on a passed ball.
The Lady Panthers(17-16) tied it in the bottom of the first as Madisyn Frazier drew a walk, swiped second and scored on a two-out RBI single to shallow center by Haylee Ford.

“We hit the ball well in big moments today, especially with two outs,” said Gallardo. “That’s what you want to do, step up in crucial situations and we were able to do that.”
The Lady Cardinals struck for a pair of runs in the fifth with two outs.
With two outs, Wilbur reached after being hit by a pitch and Anderson came up big, ripping a RBI double to right field. Natalie Reed then hit an infield single and Anderson was able to score on a Liberty throwing error.
Bridge City got some insurance in the top of the seventh.
Peyton Trapp had a leadoff single to center and Wilbur drew a walk. Jaylynn Burch promptly belted a RBI single to left to plate Trapp and Aleah McClanahan made it 5-1 with a deep double to center to score Wilbur.
Frazier tossed all seven innings for the Lady Panthers, allowing nine hits while fanning two and walking two.
The Lady Cardinals dominated Game Two as they piled up 12 hits off Liberty pitchers Frazier and Sarah Lopez.
Bridge City grabbed a 1-0 lead in the bottom of the first as Wilbur reached on an infield single, advanced on a Anderson sacrifice bunt and scored off a Reed single past third.
The Lady Cardinals erupted for four runs in the bottom of the second.

Chloe Halliburton reached on a leadoff walk and went to second on a Maggie Garcia sacrifice bunt. Wilbur drew a walk and Anderson scored Halliburton with an infield single. Reed would strikeout on the next at-bat but reached first safely after an errant throw as Wilbur scored.
Burch came up big as she planted a Frazier pitch for a two-run single up the middle.
The Lady Cardinals tacked on a pair of runs in the fourth.
Wilbur had a leadoff single to center and swiped second and went to third on a Anderson groundout. Wilbur scored when Reed cracked a deep RBI triple to right field.  Burch got a fielder’s choice RBI as Reed was able to beat the throw at home.Liberty got on the board in the sixth as Karyn Parker had a leadoff single to right and eventually scored on a deep double to center by Haylee Ford.
Bridge City added a run in the sixth.
Burch had a one-out single past short and McClanahan followed with a double to left and Meagan Sourdellia plated Burch with a single to center.