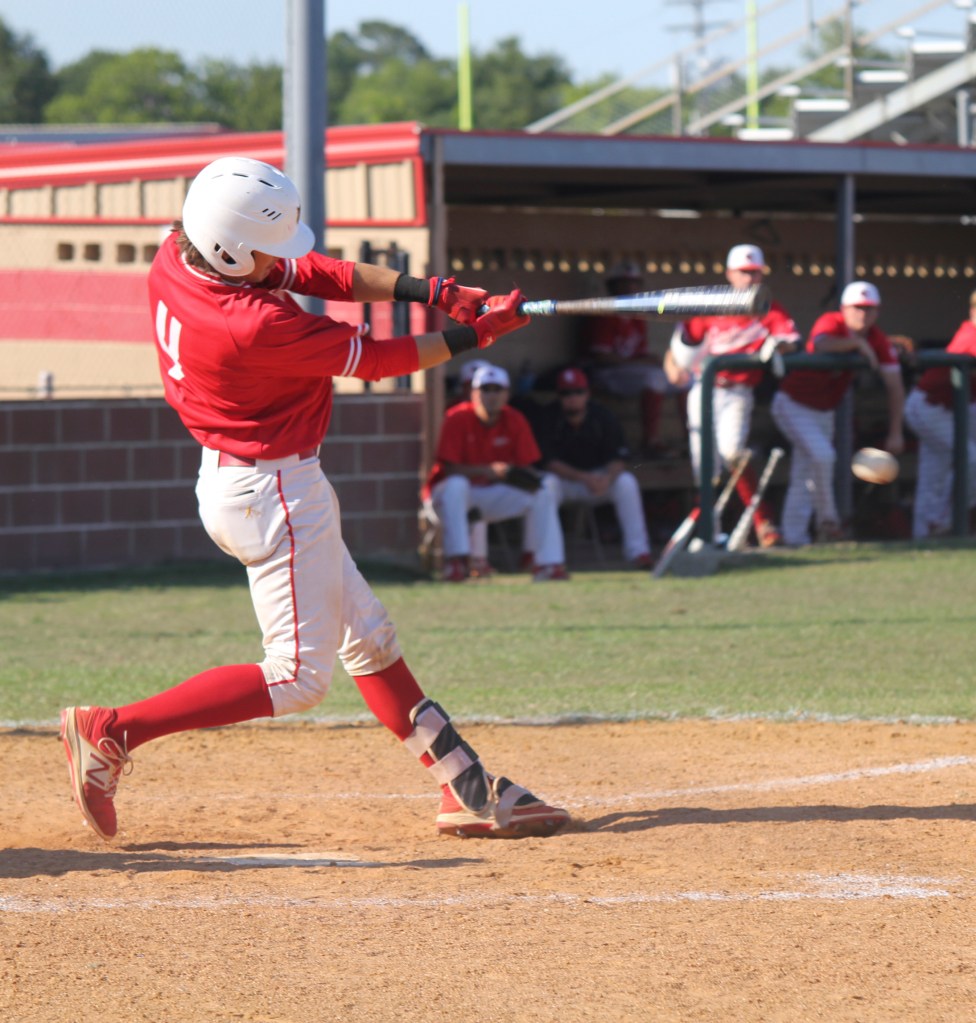 BRIDGE CITY —The Bridge City Cardinals hammered the Huntington Red Devils twice Saturday to advance to the area round of the Class 4A Region III playoffs.

The Cardinals whipped the Red Devils in Game Two 13-3 and spanked them again 12-0 in Game Three to seal the deal in five innings in both games after the Cardinals dropped a tough 2-1 decision in nine innings in Huntington Friday night.

The Cardinal offense was hot in both games today and continued it throughout with the 25 runs in two games.

The Cardinals (16-12) will move on to face Liberty in the area round next week.

In Game Three the Red Devils loaded up the bases in the first inning looking to do what the Cardinals did in Game Two, but were unable to make anything happen as Caleb Dubois found his way out of the situation with groundballs and fly outs.

The Cardinals copied what the Red Devils did, but in this case it paid off. Schuyler Thibodaux, Logan Hamm, and Caleb Dubois all hit singles to set up Justyn Romero, who belted a grand slam to bring them all in. Brady Coulter reached on a bunt single, Jackson Tims got on with a single and Gavin Green drove in Coulter on a long single to left fieldas the Cardinals went up 5-0 in the first inning.

The Cardinals hit well all day long and continued it in the fourth inning. Tims got on from an error, Green reached on a walk and Logan Hamm reached on a walk as well. Dubois knocked all three in with a long triple to the left field fence. Gordon hit a single to left and knocked in Dubois. Romero reached on an error and stole second base. Romero was knocked in with Luc Hollier’s bunt single. Case Skinner moved Hollier to third and Tims knocked in the run with a sac fly to left field.

With that second burst of offense the Cardinals took a 12-0 lead and looked to close out the game the same way they did in Game Two.

Peyton Havard for the Cardinals came in to close out the game for Bridge City. Havard closes out the inning and the side for Bridge City as they advanced to the next round of play.

The Cardinals take a game two victory in tremendous fashion as well.

The Cardinals started off the game hot in the bottom of the first inning with early hitting. Thibodaux led off with a single and Hamm knocked Cameron Yadon, pinch runner, in with a triple to follow it up. Dubois drew a walk and stole second base. Romero came up next and knocked in both runners with a double to left field. Gordon reached base on a walk and Hollier reached on an error to load the bases. Jacob Goodman drew a walk driving in the fourth run of the inning. Gavin Green drew a walk of his own driving in the fifth run of the inning. The Cardinals would hit through the lineup in the inning putting a big lead for Goodman to work with on the mound.

Romero reached base in the second inning off an error by the shortstop and Gordon got on base with a single moving Romero over to third. Hollier knocked in Romero with a sac bunt making the score 6-0 after two innings.

The Cardinals didn’t let up as they found more runs in the third inning. Green got on with a fielder’s choice, Thibodaux got on with a single and they intentionally walked Hamm. Dubois hit a long sac fly to knock in Green from third base and Yadon scored by stealing home, making the score 8-0 Bridge City after three innings.

Huntington finally found a run in the top of the fourth. Chandler Reece led off with a single, Sawyer Thornhill followed up with a single of his own and Banden Stephens knocked in Reece with a long double to left field. Tre Anderson hit a sacrifice grounder to knock in the second run scoring Thornhill. Stephens scored off of an error on a dropped third strike finding the third run for the inning as the Red Devils cut the margin to 8-3.

The Cardinals’ offense wasn’t done yet. Gordon, Case Skinner and Coulter all reached base on singles. Goodman drew a walk to bring in one run, Green hit a single to bring in another run as BC grabbed a 10-3 edge.