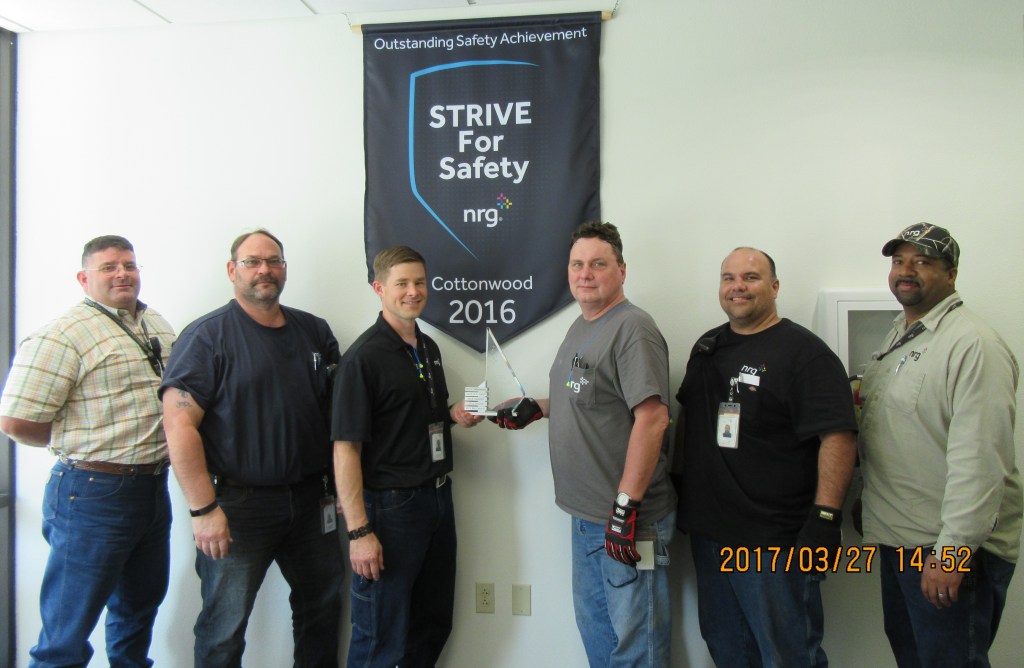 Courtesy photo Jared Banken, Kenneth Wilkins, Bryan Butler, Harlan Moore, John Peltier and Christopher DeJean of Cottonwood were presented with the coveted STRIVE for Safety Award for 2016. Employees worked to restore the Cottonwood Generating Station in Deweyville to restore power in the area after the March 2016 flooding.

Just like the rest of the local community, Cottonwood Generating Station in Deweyville was impacted by the April 2016 flooding. Employees and contractors worked hard to restore the power plant, which was flooded with 5 ½ ft. of water, back to service. In total, 350,000 man hours were spent over six months in restoration operations. The entire time, safety was top-of-mind for the employees and contractors at Cottonwood.
Cottonwood power plant’s 30 employees live in the surrounding communities of: Orange, Deweyville, Beaumont and Mauriceville. Two Cottonwood employees homes were from the area impacted by the flood. While working to restore the station, they were also dealing with the impact of the floods on a personal level as well.

The collective team acted so safely, that employees at the power plant won NRG Energy’s coveted STRIVE for Safety Award for 2016. The prize is awarded annually to the team that best demonstrates safety, one of NRG’s core values. Cottonwood was selected among 100 locations to win the award.
A judging committee made up of NRG’s regional safety managers and senior executives selected Cottonwood for criteria based on exceptional safety performance by the numbers, consistently exhibited proactive safety behaviors and general employee involvement at all levels of the organization. I’ve attached a photo of a few employees with their award.
Owned by NRG Energy, the nation’s leading integrated power company, Cottonwood Generating Station employs 30 people.
The plant also donated $50,000 to the Deweyville school district after the flooding, as previously reported in The Orange Leader.

Equipped with a 10 kW solar array, diesel generators and a climate-controlled pavilion, the 26-foot long truck serves as a base for emergency personnel and the public to charge electronics, access Wi-Fi, stay up-to-date on news and more.

A control center inside the vehicle helped monitor the frequency and AMPs, making adjustments as needed between the solar panel generated power and the 32 diesel generators. Not only did the electricity generated charge cell phones for the first responders but also air-conditioned the pavilion on site for the volunteers.

Torrential rainfall from March 8-11, 2016 caused the Sabine River to rise to historic levels and produce flooding across the region, including the Deweyville Elementary School, which was inundated with five feet of water.

NRG employees from all over the company, including the West Coast, East Coast, and Midwest, came to help restore the plant. At peak restoration efforts, there were roughly 310 employees and contractors onsite.

All four units of the plant were restored by September 2016.