Three from Orange arrested for tying up Starks man 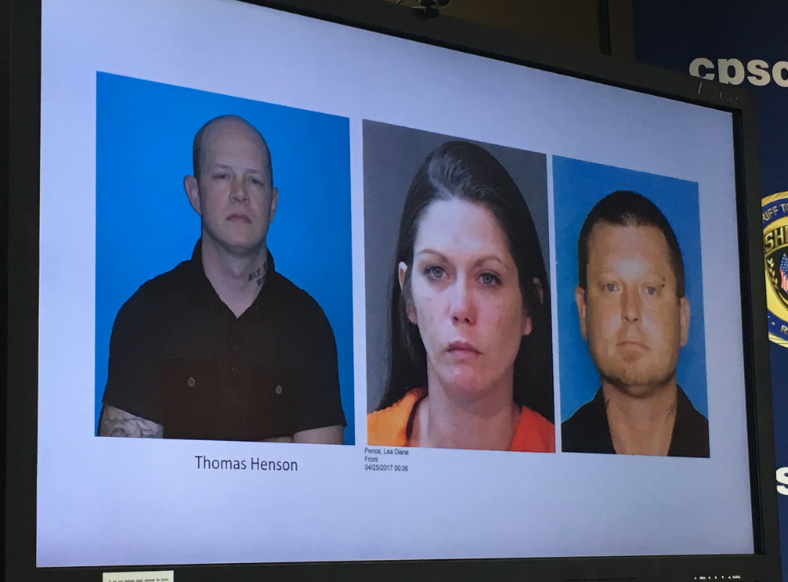 Calcasieu Parish Sheriff Tony Mancuso said a “Meals on Wheels” employee discovered an 83-year-old man tied up inside his home in Starks Monday.

The man was tied up for about seven hours before being discovered, Mancuso said. Several guns, the victim’s cellphone and wallet, along with other items, were stolen.

“It really is just strangers there is no acquaintance here,” said Mancuso.

The victim told police that a man and a woman visited his home earlier in the month and asked for a place to stay, said Calcasieu Parish Sheriff’s Office spokesman, Cmdr. James McGee. Detectives learned that the same two individuals were seen at the victim’s residence the day before the burglary.

The man and the woman who visited the residence were later identified as Lea D. Pence, 33, and Thomas C. Henson, 32, both from Orange. Both have criminal histories. Helmer was also involved in the burglary, according to McGee.

Henson was arrested and booked by the Orange Police Department on narcotics charges.  After detectives interviewed Pence she was arrested and booked into the Calcasieu Correctional Center and charged with aggravated burglary; theft of a firearm; theft over $750; cruelty to the infirmed; and false imprisonment while armed with a dangerous weapon.  Judge Robert Wyatt set her bond at $117,500

Tuesday morning, investigators were able to identify Helmer as the third suspect in the burglary.  Detectives issued warrants on Henson, who is currently incarcerated in Orange, and Helmer for aggravated burglary; theft of a firearm; theft over $750; cruelty to the infirmed; and false imprisonment while armed with a dangerous weapon.  Judge Robert Wyatt set Henson’s bond at $155,000 and Helmer’s at $135,000. Helmer was finally caught Tuesday afternoon by Orange Police and arrested for the active warrant out of Calcasieu Parish.

“All (crimes) are alarming, but this is not two drug dealers that didn’t pay each other and are mad at each other,” Mancuso said. “This is a man in his home, minding his own business and people preyed upon him.”

All three suspects will be charged with cruelty to the infirm and false imprisonment charges.

“I hope that they don’t have to walk the streets of our parish or anybody else’s community for a long, long time,” Mancuso said.

Meals on Wheels released a statement in regard to the incident:

“Meals on Wheels not only provides a nutritious meal for our clients but it is truly a lifesaver for them.  Many of our clients have no family to check on them and this is where our staff comes in.  I am so proud of our Meals on Wheels drivers for the extraordinary job they did yesterday with our client in Starks.  They never know what they may find when they get to a client’s home.  Many times, we have found clients who have fallen during the night or may even be deceased.”   – Angie Herr, Director of Programs at Calcasieu Council on Aging