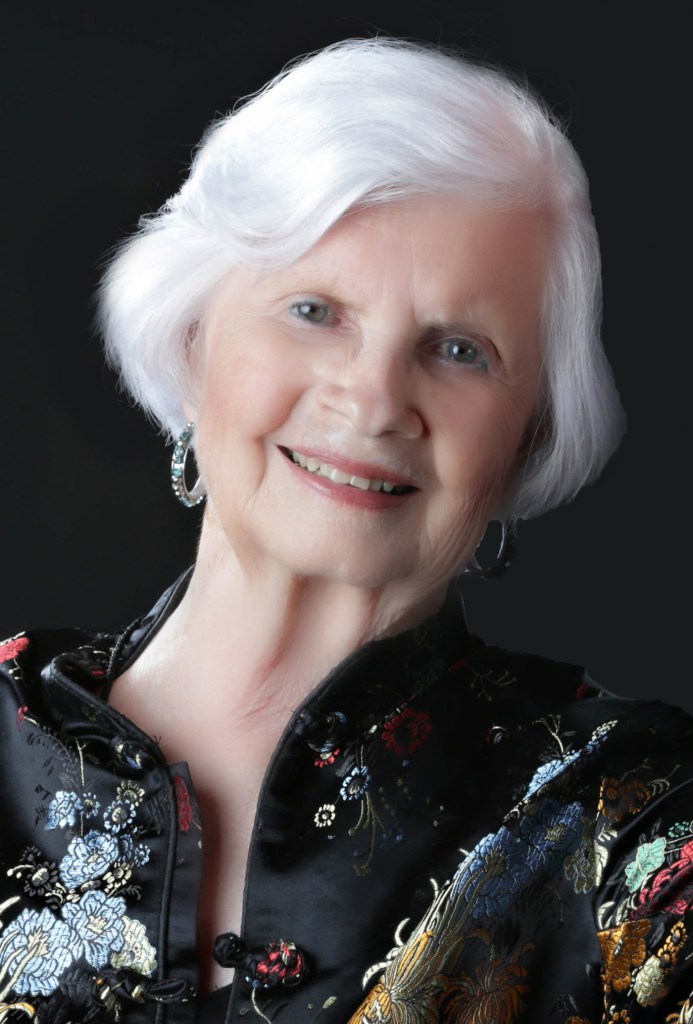 Marilyn Anne Washburn Powell, 86, of Orange, passed on to her heavenly home on April 14, 2017, in the comfort of her home.

A Memorial Service will be held at 2:00 p.m. on Saturday, April 29, 2017, in the sanctuary of the First United Methodist Church in Orange with Reverend John Warren officiating. Interment will follow at Presbyterian Columbarium at a later date.

Marilyn was born in Wichita Falls, Texas, February 26, 1931 to Russel H. and Wilna Roberts Washburn. Her School years were spent in Kilgore, Texas, moving to Houston to finish high school at Lamar High School. She obtained her Bachelor Degree in Education at the University of Houston. While teaching Kindergarten in her first year in Port Arthur, Texas she met her husband, Richard (Dick). Upon marriage in 1954, they lived in Parkersburg, W. VA, for four years, returning to Orange with the start of their family. The Powell family grew to include five children, eleven grandchildren and seven great-grandchildren. Marilyn had a generous heart and lent her time and talent to a number of organizations. Among these include AAUW, Orange Service League, Board of mental Health and the Board of Presbyterian Day School. She and Dick were organizers of the popular Tempo Dance Club; Marilyn served as the first Chairman for Administration in the Lutcher Theater Guild. She was active in family activities which included the Reading Program in the Little Cypress Junior High School, homeroom duties, Blue Birds, Camp Fire and helped coordinate Boy Scout dinners and children’s choir at church. With her husband, they served as catalyst in the introduction of Special Education in the LCM School District in 1967-68. A passion of Marilyn’s was the Philanthropic and Educational Organization (P.E.O.), which supports the advancement of women through education. She was introduced to P.E.O. in 1990 and served as President of Chapter GW from 2001-2002, remaining active thereafter. Another joy was her association with Shangri La Gardens where she volunteered. She has also been coordinator of the Community Concerns of her church family for several years. Her many hobbies have included genealogy, sewing, needlework, quilting, hand-crafts, reading and traveling the world. However, Marilyn’s greatest joy was with her husband and five kids on their outdoor adventures together, including hiking, camping, canoeing, and sightseeing throughout the U.S. Her love, laughter and warm embrace will be missed beyond measure.

Marilyn is survived by her husband, Dick of nearly 63 years; her brother, Jack Washburn of Oklahoma City, OK; her son, Alan Powell of Orange; her daughters, Kay Southerland (Nick) of San Antonio, Lori O’Brien (Randy) of Harker Heights, TX, Amy Hermance (Dean) of Hillsboro, OR, and Cara Catlett (Scott) of Canyon Lake, TX. Her Grandchildren, Scott and Nicole Southerland, Chris Southerland, and Rebecca and Michael Rice, all of Austin, TX; Jessica and Jason Singer, Chase and Marissa Powell, of Orange; Megan, Kyle and Kelton O’Brien of Harker Heights, TX; and Jacob and Grace Hermance of Hillsboro, OR.

Memorial donations in honor of Marilyn may be made payable to either of the following: First United Methodist Church-Orange 502 North Sixth Street, Orange, TX 77630 or to P.E.O. Chapter GW 2519 Fairway, Orange, TX 77630.