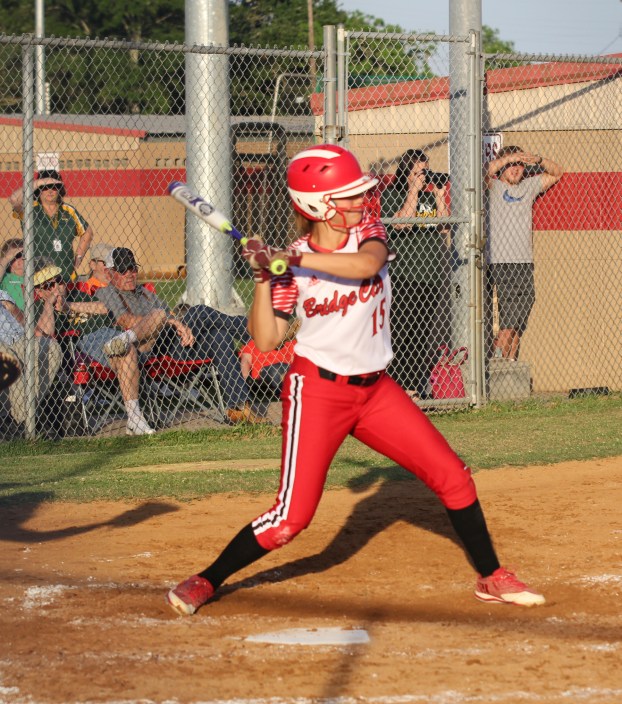 Leader Photo by Van Wade Bridge City's Caitlin Denison looks for a pitch against LC-M. Denison had the game-winning RBI in the ninth inning as BC won 1-0.

BRIDGE CITY – In a game that showcased some of the best pitching talent in the Southeast Texas area, it was the Bridge City Lady Cardinals that had the final say against the Little Cypress-Mauriceville Lady Bears in a huge District 22-4A tilt at Lady Cardinal Field.

Bridge City junior ace Kassidy Wilbur and LC-M sophomore ace Brianna Frenzel were on cue all night for nine innings but the Lady Cardinals were able to move into first-place alone in the 22-4A standings when third baseman Caitlin Denison roped a two-out single to right to score Peyton Trapp for the winning run.

Wilbur recorded her second straight shutout against the Lady Bears. Bridge City downed LC-M 3-0 in the first half of district play on the road as Wilbur fanned 16 and allowed just two hits. She was equally as effective Wednesday as she struck out 18 as she allowed just two hits and walked two.

Frenzel was just as strong mowing down the Lady Cardinals.

The Lady Cardinals could only muster three hits off of her as Frenzel put together 15 strikeouts and walked just one.

Bridge City finally got something going in the bottom of the ninth.

Trapp led things off with a single to right and moved to third after two nice sacrifice bunts by both Wilbur and Kyndall Harrison. Denison then came up with the dramatics. After fouling off three Frenzel offerings she was finally able to get of hold of one straight as she smashed a deep single to rightfield that brought in the winning run. Neither unit could get anything going offensively.

Wilbur had the game’s first hit with a leadoff single in the bottom of the first and swiped second with two outs but was left stranded.

Lady Bear Jenna James had a one-out single in the top of the sixth but Wilbur struck out the next two batters she faced.

The Lady Bears put two on in the top half of the seventh when Wilbur walked both Ashley Short and Renna Toomey but Wilbur collected another strikeout to terminate the threat.

LC-M had another shot in the top of the eighth when Jayce Perry had a leadoff single. With one out, Perry advanced to second on a passed ball but was left stranded.

The Lady Cardinals will take on Silsbee Friday to make up a game that was missed Tuesday due to the bad weather and will visit West Orange-Stark Tuesday. Meanwhile, the Lady Bears will look to bounce back when they welcome in Orangefield Tuesday.