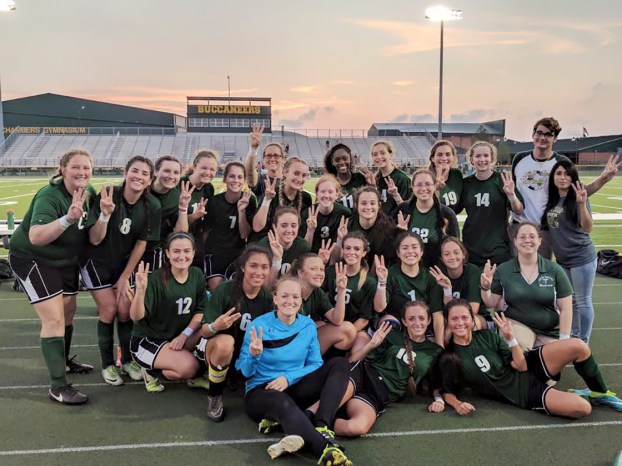 The Lady Bears (19-3-2) led the Lady Blackcats 2-0 at the half only to see their counterparts come back to tie the game in the second have.

However, the Lady Bears were not going to be denied when Kourtney Baldwin broke loose and booted in the game-winning goal with less than three minutes remaining.

The Lady Bears will move on to face old nemesis Jasper in the Region III Final Saturday at 10 a.m as they will look to work some Cinderalla magic against the state power.

The Lady Bulldogs (25-1) defeated Brazosport 6-0 in the first game of Friday’s doubleheader.

Jasper will be making its third straight regional finals. The Lady Bulldogs advanced to the 4A state title game last season where they fell to Kennedale 6-0.

Jasper defeated the Lady Bears 7-0 early on this season. The two met in the playoffs last year with the Lady Bulldogs taking a 6-0 area mound battle.

Baldwin got loose a breakaway to put the Lady Bears up 1-0 seven minutes into the match against Bay City.

With less than five minutes remaining in the first half Lady Bear Avery Holland was able to punch in another goal.

Bay City was able to trim it to 2-1 when Araceli Caballero broke the shutout bid with a goal with 32 minutes remaining.

Lady Blackcat Jennifer Dabelgott even things up with a little more than eight minutes remaining in regulation.

Bay City finishes the season with a 14-7 mark.

The Lady Bulldogs defeated Brazosport by scoring three goals in each half.

Jasper took a 3-0 lead in at the half enroute to their 18th shutout of the season.

Kylee Dominy had the hat trick for the Lady Bulldogs, scoring three goals.

Dominy scored her third goal early in the second half. Carter made it 5-0 with a big kick and Richardson tallied the last one.