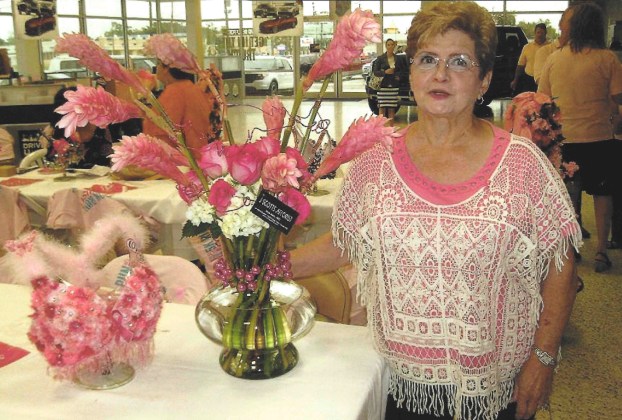 Not often does a person pursue a life of devotion to helping others.  Orange is lucky to have such a person in Patricia “Pat” Thibodeaux McKee, a native of Orange and the only child of Rowena Castex of Parks, Louisiana, and Allen Thibodeaux of Breaux Bridge, Louisiana.  She and her family moved away for only five years when Pat was 4, returning to Orange after five years in Breaux Bridge, where her dad had begun a business with his brother.

Pat attended St. Mary Catholic School in Orange, graduating in 1960 as salutatorian, where she served as a cheerleader and member of the girls’ basketball team. She then attended Durham Business School in Beaumont, earning a two-year Secretarial Certificate in 1962. Meanwhile, she had met S.R. “Sonny” McKee, Jr. at what was previously known as Zach’s Drive-In, located where the current Payless Shoe Store sets in Orange.

Pat and Sonny, a Stark High School graduate of 1957, were married in Oct. 1962.  Three years later in 1965, a daughter was born, followed by a son in 1970.  Later, in 1991, Pat and Sonny were blessed with a granddaughter.  All three offsprings are graduates of Little Cypress-Mauriceville High School.

Pat worked for Orange DuPont in the Purchasing Dept. from 1966 until retirement in 2002.

Meanwhile, as a hobby, Pat and Sandy McCormick went in business together for 25 years in retail sales, which resulted in the forming of The Grapevine, an Orange gift shop located on 16th Street, until Jan. 2011.

For several years, Francis Lyons, well-known for his clock repairs, was a partner at The Grapevine. Sonny worked for years as a Boilermaker/Welder all over the United States.

Sonny passed away in 2006 from prostate cancer, after several years with Pat as his willing caregiver and nurturer.

Unfortunately, the bad “c” word called “cancer,” intervened in 1995, and once again in 2015, in Pat’s life as breast cancer.  Never a complainer, Pat became an active volunteer in the Julie Rogers’ Gift of Life Pink Power.  For her enduring efforts, Pat achieved the 2011 Spirit of Volunteerism Award and the 2014 Gift of Life Volunteer of the Year Award.  The Julie Rogers’ Gift of Life annual award is based on service and dedication in the mission of saving lives.

Pat has continued to give of herself through the years as a member of St. Francis of Assisi Catholic Church in the Young at Heart Group as well as on the Bereavement Committee, Service League (SL) of Orange member, Baptist Orange Hospital SL Gifts, Etc. Chair, SL Toy Coffee and Follies participant, and Orange County Friends (OCF) member.

On the other hand, when asked if she could meet one famous person, living or passed, she said she would have liked to chat with Jacqueline Kennedy Onassis since she was complicated, educated, graceful, poised, spiritually faithful, and had the stamina to hold her life together and to do what was needed, even in the dark veil of tragedy.

By Dawn Burleigh The Orange Leader   An annual Spring tradition returns with the 15th Annual Art in the Park... read more