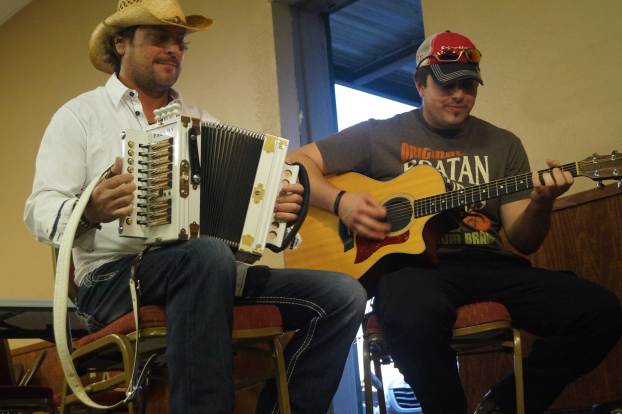 Randy Strong/The Orange Leader Zydeco phenomenon Bernie Allen and country artist Bretten Low combine their musical talents to give the Mauriceville Heritage Association, festival sponsors and the media a taste of what to expect at the Mauriceville Crawfish Festival.

Crawfish Festival to kick off April 21

The festival, which has been held annually since 1981, has been committed to showing the unique culture of the area and raising funds to establish recreational areas  for the youth as well as assisting the communities local emergency services.

For three days, residents of Orange and neighboring counties will have the opportunity to enjoy a variety of food, art and family fun.

Throughout the weekend, visitors will have the opportunity to enjoy carnival rides, games and all of those edible summertime favorites that make festival memories as well as amazing local fare and, of course, tons of crawfish.

Kicking off the weekend, on Friday, April 21, is musical entertainment will be Houston/ Beaumont area artist Danny Dillon with a style and taste all his own.

Next comes Bretton Low with a striking high-energy style that won him 2009 Entertainer of the Year at the Texas Country Music Palace Theater and closing the nights musical entertainment will be 2013 Grammy winner Wayne Toups.

Sunday will conclude 2017’s Mauriceville Crawfish Festival, a historic tradition that has reflected the heart and soul of the community for 37 years.

Play Day at Stay and Play

Special to The Leader Little Cypress Intermediate would like to invite families in Orange County with special needs children to... read more