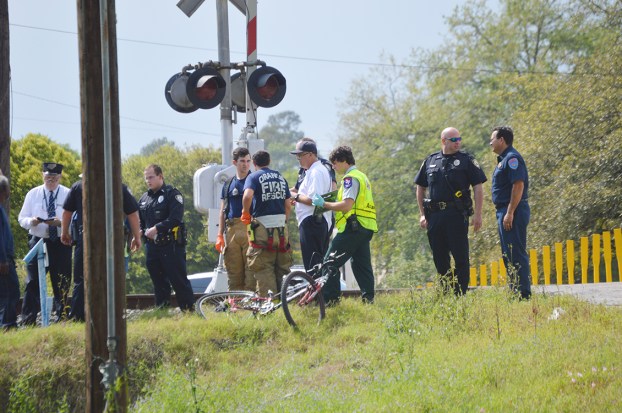 Eric Williams/The Orange Leader A bicyclist was struck by a train on Saturday at the 1200 block of Link Street in Orange. The man was attempting to beat the train by pushing his bicycle across the tracks before the train pain passed, according to a press release.

A man whose bicycle was struck by an Amtrack train on Saturday was able to walk away from the collision.

At approximately 3:12 p.m. Saturday, Orange Police Department received a 911 call in the 1200 block of Link Street in Orange in reference to an Amtrak passenger train versus a bicyclist collision.

On arrival, first responder’s found a male, 55, lying on the track just south of the link street crossing.

After meeting with the train’s engineer, it was discovered that the man ignored the train crossing arms, lights, and the approaching train. He attempted to beat the train by pushing his bicycle across the tracks before the train pain passed, according to a press release.  He was unsuccessful and the train struck the bicycle’s rear tire.

The man was knocked to the ground by the impact of the train.

He was uninjured and walked away from the scene after being examined by Acadian Ambulance Personnel.

By Anne Payne The Orange Leader Lavern Sterling started exploring the Navajo Reservation in the states of New Mexico, Arizona, and... read more