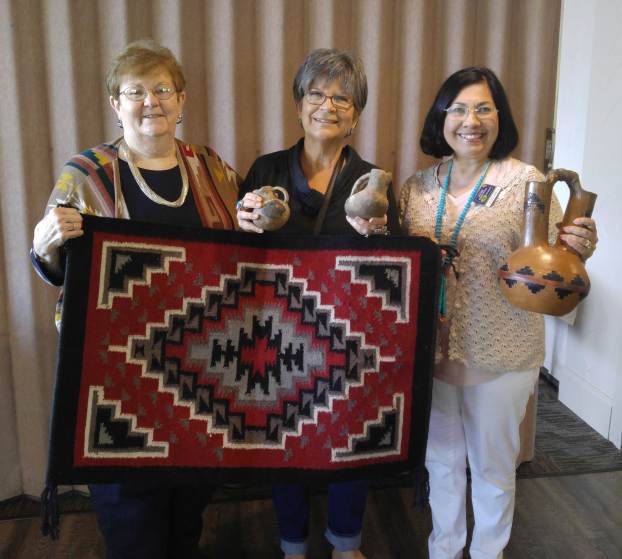 Anne Payne/The Orange Leader Lavern Sterling of Orange shared her experiences with Golden K Kiwanis, on Wednesday, which she and her husband have cherished in their 14 years of travel to the Navajo Reservation in the states of New Mexico, Arizona, and Utah. Sterling, center, holds 2 relics given to her by a Navajo, both believed to have been from a cave about 1300 A.D., likely left in a mass exodus. Golden K member Juliet Smith, right, holds a piece of hand-made wedding pottery and wears a hand-made turquoise necklace, while Kiwanis Regional Lt. Gov. Karen McKinney, holds a hand-made rug, all items given to Sterling over her years visiting Navajos.

Lavern Sterling started exploring the Navajo Reservation in the states of New Mexico, Arizona, and Utah nearly 17 years ago before she retired three years later from Orange Dupont as a secretary.

She and her husband have now spent 14 years traveling to the “Res.,” as it is commonly called, from their Orange home. Lavern recently spoke to Orange Golden K Kiwanis regarding the culture of the Navajo people.

The Sterlings drive to the Res. by way of their Recreational Vehicle (RV), anchoring near Ship Rock, New Mexico, close to Mission, NM in an area called Hog Back.

No one but Navajo Indians are actually allowed to spend the night on the Res.

Lavern says she has learned to cook Fry Bread, Kneel DownBread, Mutton Stew, and chicken in a mud oven or cooked in the ground with hot coals, wire, and a metal cover, with corn steamed on top.

“The only thing I could not do was slaughter a lamb or watch one slaughtered,” says Lavern.

There are no fast food establishments on the reservation, except in four towns. The Res. covers a massive amount of miles.

“One other food item,” Lavern added, “is Navajo tea, good for kidneys and arthritis, coming from a certain yellow flower.”

Traditionally, according to Lavern, the Navajo people are known as sheep herders, basket makers, jewelry artisans, ceramic potters, and rug weavers. This is the way they make their living.

In fact, they boil flowers for colors, shear sheep to make their own thread, and create an all-natural product, resulting in a product much higher in quality than an

imitation bought in a retail store. Their philosophy appears to be quality over quantity.

The cliff dwellers of the Mesa Verde region found beans inside pottery many, many years ago. These beans are even available now for purchase, much like pinto beans but lighter in texture.

Do not ask a Navajo to point where the beans are sold, because they do not point with their fingers, only their lips. The culture teaches never to point.

To grow their crops, the Navajo people years ago had to establish some type of irrigation system, so some persons of Jewish descent guided them through the process.  The Jewish culture is known to have roots in agriculture, as well as in sustainability.  As a result, when traveling on the Navajo reservation, one will view miles and miles of fields with irrigation systems, resulting in fresh produce in the desert.

The Navajo persist in their history of superstitions, as the belief in curses continues to exist among some.

For example, Lavern added, “If a Navajo leaves the reservation after his or her birth card is buried, a curse is believed to exist on that individual. If a coyote runs in front of a Navajo person to the East, then that male or female shakes corn starch on the coyote’s path, superstition declares, to prevent evil in one’s life.”

History confirms, years ago, Navajo children were taken to boarding schools where their hair was cut, moccasins taken away, skin bleached, and speaking their native language of Navajo was forbidden, unless they desired to be beaten.  Upon returning to the Res. as teens, the children did not relate to family warmth, as parents had not reared their children, so a loving bond had not formed.

Many Navajo, and other Native Americans living on reservations, become diabetics. Their diet is one high in carbohydrates (carbs) with corn products and breads.  Also, alcohol appears to be a staple among some of the men.

When a casino is nearby, the alcohol addiction becomes even more of a problem.

“Even today, many Navajo do not have running water or electricity, bathing in snow in the winter months and drawn well-water in the warmer ones; most of the homes have dirt floors with stoves in the middle of the room,” noted Lavern.

Outhouses are a very common item since no running water is usually “par for the course.”

Despite the absence of the usual common comforts, Lavern and her spouse still make the journey each year to help the Navajo in every way possible, receiving much more pleasure than tribulation.

By Dawn Burleigh The Orange Leader Over 400 questions were submitted by students for the Candidate Forum held at Lamar... read more