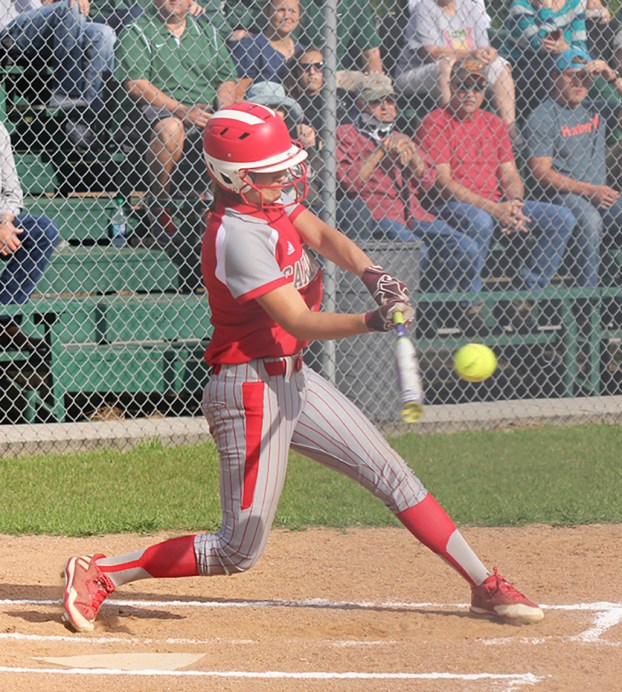 LITTLE CYPRESS— Getting three straight hits in the top of the seventh inning, the Bridge City Lady Cardinals scored three runs to break a scoreless tie as they went on to defeat the Little Cypress-Mauriceville Lady Bears 3-0 in District 22-4A action at Lady Bear Field Friday evening.

The Lady Cardinals (2-1 in district play) received another superb outing from junior ace Kassidy Wilbur. Wilbur tossed a complete-game two-hitter, striking out 16 and walking just one.

The Lady Cardinals got it going in the seventh against LC-M reliever Jenna James, scoring all three of their runs with two outs.

Natalie reed drew a one-out walk and went to second on a Peyton Trapp sacrifice bunt. Abby Anderson brought home Reed with the game-winning run with a single up the middle.

Wilbur then plated Anderson with a RBI single to right and Wilbur eventually scored off a Kyndall Harrison RBI single up the middle.

Frenzel had the game’s first hit, roping a Wilbur offering for a two-out triple in the bottom of the first but Wilbur fanned Ashley Short to get out of it.

Anderson had a leadoff bunt single for BC in the top of the third but was left stranded.

LC-M threatened in the fifth.

Olivia Leavings reached on an infield single and swiped second. She went to third on a Renna Toomey sacrifice bunt but Wilbur got out of the jam by striking out both James and Jonee’ Villaneuva.

The Lady Cardinals came up empty in the top of the sixth.

Wilbur reached on an error at second and Harrison singled up the middle to move Wilbur to second. Caitlin Denison moved the runners over with a sac bunt but James got out of it when Chloe Halliburton grounded out to third.

The Lady Cardinals return home next Friday to face West Orange-Stark while the Lady Bears will venture to Orangefield.

HAMSHIRE — The West Orange-Stark Mustangs took down the Hamshire-Fannett Longhorns 6-4 in District 22-4A play at Longhorn Field Friday... read more