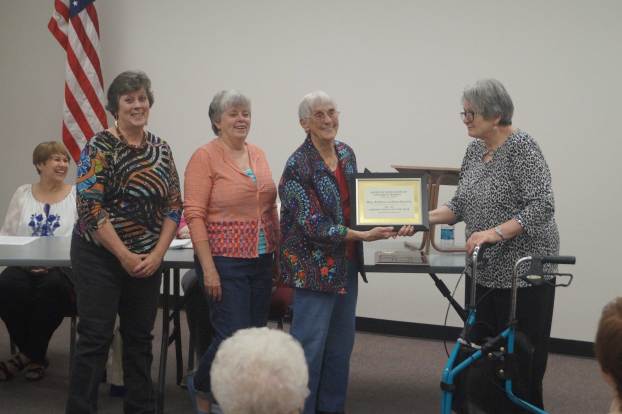 American Association of University Women(AAUW) honored Dr. Kathleen Kennedy, her sister, Karen Kennedy, and their mother, Mary Kennedy, with the award of Library Family of the Year 2016-2017.

The trio whose Origins are from Olean, New York moved to Orange, one by one, starting with Kathleen Kennedy, a veterinarian, who began the long journey to Southeast Texas in 1991.

Dr.  Kennedy begin her career in Orange working for Dr. Max Pachar at the Pachar Veterinary Hospital. Kathleen eventually took over the business and still owns and operates the hospital to this day.

Next, to make the long trek to Orange, was Karen Kennedy who moved to the area only one year later in 1992. Karen currently works at Gulf Credit Union.

Finally, it was their mothers turn, Mary Kennedy. Mary worked at the veterinary hospital a few days a week before she retired.

Although, today, the three women live different lives they all have one thing in common, their passion for books.

The Kennedy women have been visiting the Orange Public Library at least once a week, every week, since 1994.

Kathleen, Karen and Mary Kennedy’s dedication was recognized Saturday when AAUW presenter and Chair of Library Family of the Year Janelle Ramsey, of Orange, acknowledged their love for reading with a certificate, a gift card to Barnes & Noble and the Kennedy name on a plaque that will remain in the Orange Public Library for all to see.

Yes, “it is a small world after all” when three Oklahoma State University alumnae get together a long way from... read more