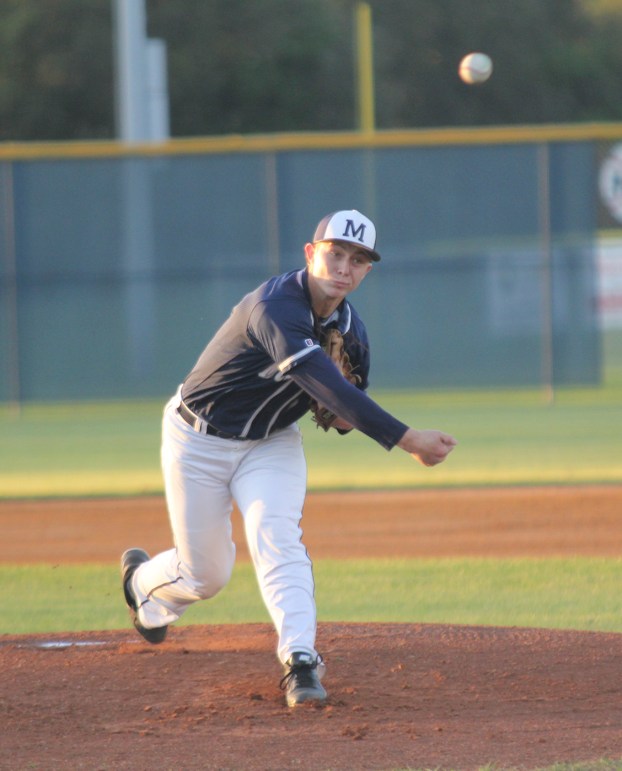 Mustangs stroll past Bears in 22-4A opener

WEST ORANGE – Getting a masterful game on the hill by senior Jack Dallas and utilizing a four-run second inning, the West Orange-Stark Mustangs opened up District 22-4A action with a 6-0 victory over the Little Cypress-Mauriceville Bears Tuesday night at Anderson Park.

Dallas went the distance on the mound for the Mustangs (12-3, 1-0). He scattered four hits while striking out 12 and walking two.

The Bears (10-7, 0-1) utilized five different pitchers that allowed seven hits while striking out four and walking three.
The Mustangs snagged a run in the bottom of the first inning.
BB Tezeno drew a one-out walk and promptly swiped second base. Ryan Ragsdale, who went 2-for-2, then sent a offering from LC-M starter Slade Green off the wall in center for a RBI double to five the Mustangs a 1-0 edge.
The Bears received a one-out double to right by Truman Franklin in the top half of the second but Dallas worked his way out of it by getting a strikeout and a groundout.
The Mustangs stacked up four runs in the bottom of the second.
Tre Bernard led off with a single up the middle. Teron Brown hit into a fielder’s choice as courtesy runner Jarron Morris was out at second. Kaleb Ramsey followed with a nice sacrifice bunt to move Brown to second. KJ Miller drew a intentional walk to load the bases.
Brown made it 2-0 when he rushed in after a wild pitch. Tezeno then hit a grounder back towards the mound and an errant throw allowed two more runs to score.
Green worked 1 2/3 innings, allowing three hits while striking out one and walking two. Spencer Boundra then took the mound for the Bears.
Ragsdale made it 5-0 when he scored Tezeno on a single by third base. Boundra tossed 1 1/3 innings, allowing one hit.
LC-M’s John Beeson ripped a Dallas pitch for a one-out double in the top of the third but was left stranded.
Michael Lee had a single for the Bears in the top of the fourth. Reagin Burdette took the mound for the Bears in the bottom of the fourth. KJ Miller led off with a single to right, went to second on a Tezeno groundout. Miller took third on a wild pitch and scored on a wild pitch to up the lead to 6-0. Burdette worked 1 1/3 innings, allowing one hit while fanning one.
J’Lon Douglas took the mound for the Bears in the bottom of the fifth. Brown had a two-out single for the Mustangs. Taylor Gilbert tossed a scoreless sixth inning for the Bears as Tezeno had a two-out single for the Mustangs.

Chris Winters had a two-out single for the Bears in the top of the seventh.

The Bears will look to bounce back at home Friday when they host the Bridge City Cardinals while the Mustangs hit the road to Hamshire-Fannett to face the Longhorns.

Here is the All-District 22-5A Girls Basketball Team as selected by the 22-5A head coaches: CO-MOST VALUABLE PLAYERS: Anastacia Mickens,... read more