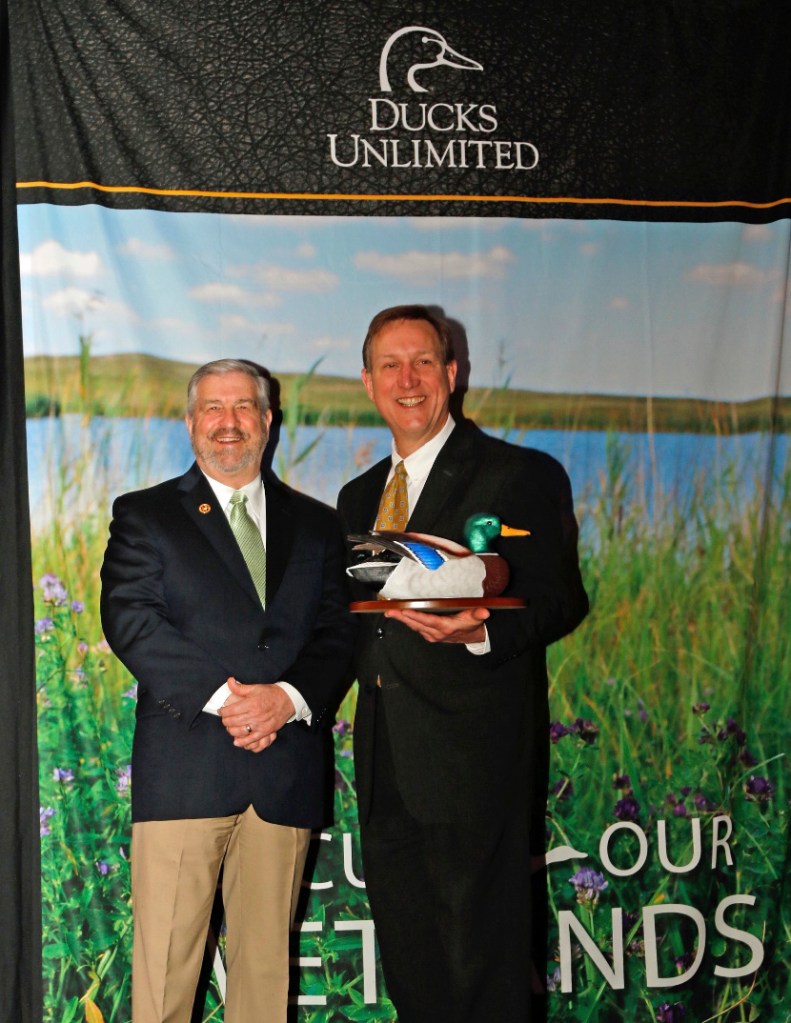 “After helping guide Jefferson County through the aftermath of Hurricane Ike as county attorney in 2008, Jeff Branick was elected county judge in 2010 in the shadow of the Deepwater Horizon oil spill. Since then, Judge Branick has strongly advocated using Deepwater Horizon restoration funds to restore and conserve the largest coastal marsh in Texas to benefit fish and wildlife populations and people,” said DU Chief Conservation Officer Paul Schmidt.

Judge Branick has partnered with state and federal natural resource agencies, U.S. Homeland Security, conservation NGOS and the energy industry to either fund or promote parts of the Salt Bayou Watershed Restoration Plan. He has traveled to Austin, Washington, and national conferences to advocate the national significance of the Texas Chenier Plain coastal marsh that includes Chambers and Orange counties, and the economic and natural security assets protected by a healthy coastal marsh buffer on Jefferson County’s coast line. Marshes play a significant role in lessening the destructive impacts of hurricanes and tropical storms and to support use of RESTORE Act (Resources and Ecosystems Sustainability, Tourist Opportunities, and Revived Economies of the Gulf Coast States Act) monies for environmental restoration projects. He supports the use of the best available science to identify restoration projects that can have the most impact for fish, wildlife and people.

“I’m extremely grateful to Ducks Unlimited for this recognition. It means a lot coming from an organization that was on the ground floor in writing the Salt Bayou Watershed Restoration Plan,” Branick said.

Judge Branick believes in collaboration among diverse stakeholders to maximize conservation results across the Chenier Plain – one of the most important wintering areas for North America’s waterfowl.

At the award event sponsored by the Wildlife Management Institute, Branick thanked Texas Governor Greg Abbott, the Texas General Land Office, Texas Commission on Environmental Quality, and Texas Parks and Wildlife Department. “At the federal level, the key partners have been the National Fish and Wildlife Foundation, U.S. Fish and Wildlife Service, National Oceanic and Atmospheric Administration, U.S. Army Corps of Engineers, Environmental Protection Agency, U.S. Department of Agriculture, Homeland Security and the RESTORE Council that have all advanced the project,” Branick said.

“Judge Branick’s dedication is second to none for investing in world class ‘green infrastructure’ by conserving wetlands that benefit waterfowl and shelter the people, homes, livelihoods, industries, ports and national defense installations in Jefferson County. He fully understands, appreciates and shares with others the interconnected nature of a healthy coastal ecosystem and our nation’s economic and defense systems,” Schmidt said.

Branick’s devotion to wise use of restoration funds does not end at the Jefferson County line. He also supports coastal restoration efforts and collaboration within the rest of the Chenier Plain, including Louisiana.

“It is for his understanding of the role healthy wetlands play to sustain wildlife and coastal communities and industry and for his tireless efforts to represent the Texas Chenier Plain as a place worth saving – for waterfowl, people and business, that we selected Judge Branick for this award,” Schmidt said.

Ducks Unlimited’s Wetland Conservation Achievement Awards are presented annually in six categories to recognize individuals who have made outstanding contributions to the conservation and restoration of North America’s wetlands and waterfowl.