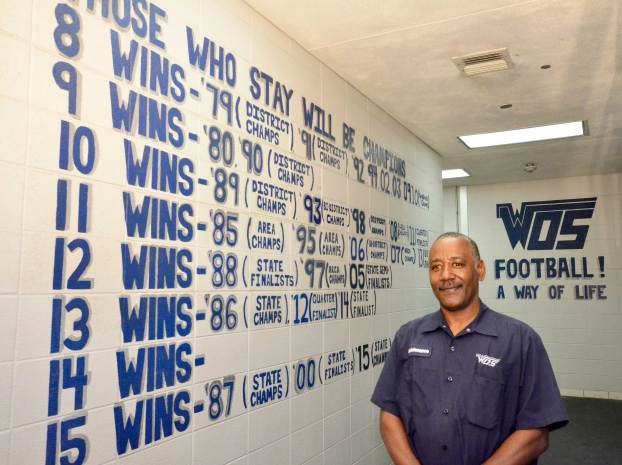 Photo courtesy of Lorraine Shannon Byron Guillory stands next to the Wall of Fame in the field house at West Orange Stark High School. The first team added to the wall with 8 wins is 1979 District Champs, a team Guillory was on. Now he works at the district.

Mustang traditions through the eyes of a former student

When one first meets Byron Guillory, one quickly discovers his love for all things Mustangs. WO-S Mustangs to be exact.

Guillory was a part of the Mustang beginnings. He graduated in 1980. The first graduating class of the then newly consolidated district was the class of 1978.

“There was a lot of talent on the team of 1979,” Guillory said. “A lot when on to play college and some went on to the pros.”

Earnest Anderson was on that team and went on to play for the Detroit Lions with the NFL and the Arizona Outlaws with the USFL. Greg Hill also played six seasons in the NFL on teams such as the Houston Oilers, Kansas City Chiefs, and Los Angeles Raiders.

“In 1978, two schools were joining,” Guillory said. “The West Orange Chiefs and the Lutcher Stark Tigers. Two rivals were brought together.”

The first Mustangs had a great deal of talent according to Guillory.

“We decided in ’78 when we first met [as a team], we had an opportunity to make something good,” Guillory said. “It did not matter who started, it was who was the best person to do the job.”

Together, the young Mustangs learned to play together as one.

“Things the coaches preached back then are the same thing you hear them say today,” Guillory said.

Familiar names from then are still on the line up today: Head Coach McCarthy, Defensive Coordinator Hook, and Linebacker Coach Thompson.

“We were very good on defensive,” Guillory said. “There was never just one player, but two or three or more coming. That is how they started with the chain gang. We would attack in gangs. You still see t today. No one stops running.”

But more than working together as a team on the field, Guillory attributes the traditions taught in the beginning as part of the pride of being a Mustang.

“It was how we were taught to be our brother’s keepers,” Guillory said. “Anybody can bleed blue – that’s pride.”

The pride established then is what brought Guillory back to Orange and the school district.

“I was a supervisor over two units, my kids were grown,” Guillory said. “My family extends to the district and I wanted to give back to what they gave to me, because of the pride established back then.”

In the weight room at the school is a sign which reads: The strongest shall survive. In the field house one can see the Wall of Fame. The same wall the 1979 Mustangs won eight and were District Champs. The same wall the 2016-2017 Mustangs created a new row, 16 wins and back to Back State Champs.

“You walk out as team,” Guillory said. “In as Champions.”

“Mustangs are champions,” Guillory said. “I take pride in everything I do. My work shows you who I am and stems from what I learned in football to be a Mustang. Be the best at what you are doing and everything will fall into place.”

Those same lessons are the ones Guillory passed onto his three children.

“Never forget where you came from,” Guillory said.

“I was gone for 28 years, but I have been back for eight years,” Guillory said. “I wanted to come back home.”

He knew he wanted to work for the district and was working in Mississippi when an opening in his field, certified electrician, became available.

“I knew I wanted to work for the school district,” Guillory said. “I knew it is where I am suppose to be.”