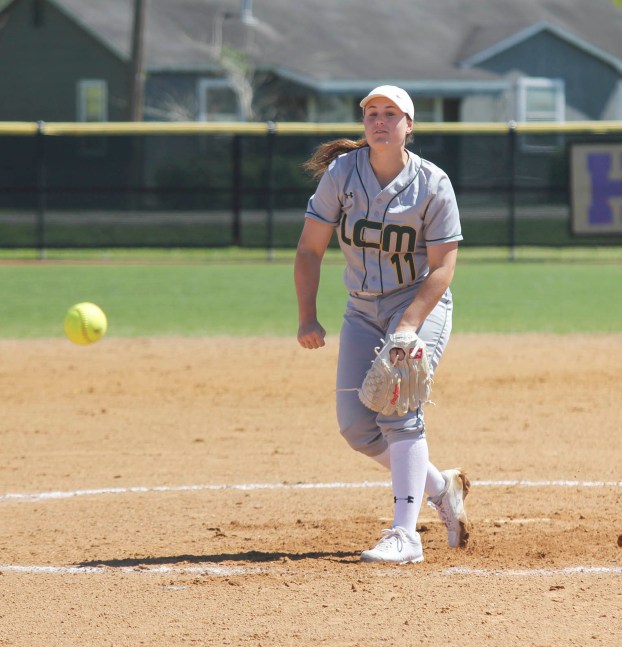 HAMSHIRE – On a beautiful Spring Break day in downtown Hamshire, the Little Cypress-Mauriceville Lady Bears made it look easy in their District 22-4A opener against Hamshire-Fannett as they buried the Lady Longhorns 17-1 in five innings of work.
Jenna James got the win on the LC-M hill. She worked all five frames, allowing just four hits while striking out eight.
Meanwhile, the Lady Bears hammered H-F pitching, collecting 15 hits and piling up nine walks as well.
Renna Toomey led the parade, going 3-for-3 with a triple and five RBI.
Madison Murdock was 3-for-4 with a double, three runs scored and a RBI. Ashley Short went 2-for-3 with two RBI. James was 2-for-4 with two RBI. Morgan Weaver was 2-for-5 while Brianna Frenzel had a RBI double.
The Lady Bears got a run in the top of the first inning as Murdock, Short and Olivia Leavings drew walks and Toomey brought in Murdock with a infield single.
The floodgates opened up in the top of the second as LC-M sent 11 players to the plate and collected five hits to tally eight runs.
Jonee Villanueva drew a leadoff walk and Joanna Henry put down a perfect bunt, after an errant throw to first and then to second, Villanueva scored.
Murdock then sent a deep double to right to plate Henry.
Frenzel drew a one-out walk and Short ripped a RBI single up the middle. Leavings drove in Frenzel with a single past first base and Toomey made it 7-0 with a two-run triple to right. After a James infield single, Villanueva hit into a fielder’s choice but H-F made a two-run error on the play.
H-F got its run in the bottom of the second. Kaitlin Summers and Brooke Cordell had back-to-back infield singles and Cordell eventually scored on a Jacie Harris single to center.
The Lady Bears tacked on four runs in the top of the third.
Weaver had a one-out single to shallow center and scored on a Frenzel RBI double to left.
With two outs, Leavings was hit by a pitch. Toomey would score Frenzel with a single and James brought in two more runs with a single down the first-base line.
LC-M had three runs in the top of the fourth. Short had a RBI single to center.  Toomey got another RBI with a bases-loaded walk and Villanueva also brought in a run with a bases-loaded walk.

On Monday, the Lady Bears went on the road and defeated Diboll 4-0 in non-district action.

Brianna Frenzel got the win on the mound. The only Diboll player to reach base was by getting hit by a pitch. Jaycie Perry also pitched and did not allow a hit.

Frenzel, Jenna James and and JoAnna Henry each had doubles.

The Lady Bears will be back in district action next Tuesday when they visit West Orange-Stark.