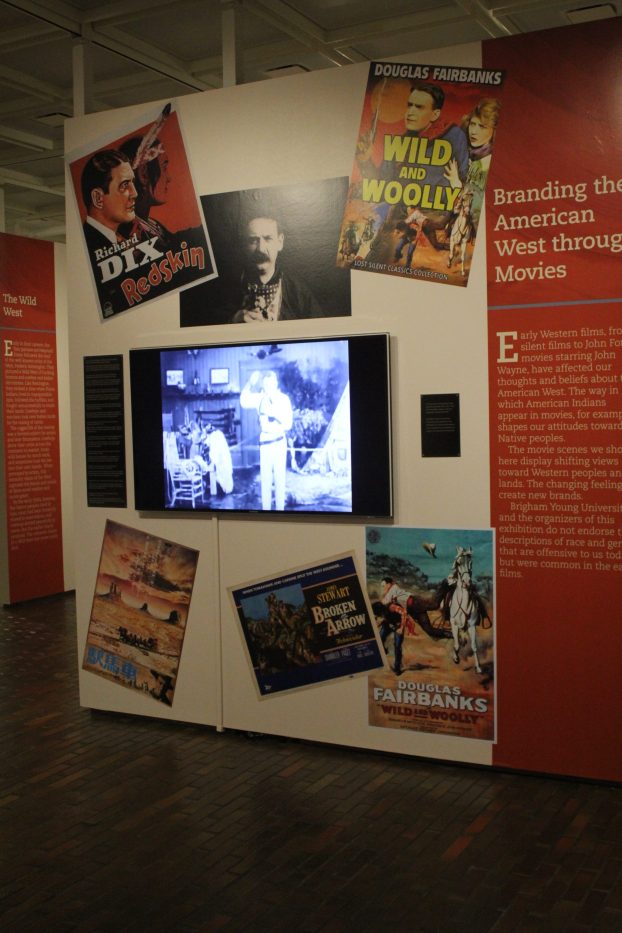 Dawn Burleigh/The Orange Leader Blending mediums of paint and film is the theme of Branding the American West exhibit at the Stark Museum of Art located at 712 Green Ave., in Orange.

A unique display of art in film and canvas creates the newest exhibit at Stark Museum of Art.

The Great Train Robbery is one of the earliest western films.

“We also have two films which people can view in their entity,” Stark Museum Curator Sarah Boehme said. “They are 12 minute long silent films.”

One of the films is His Last Game, a 1909 silent film, based on a true story of an Indian baseball pitcher who refuses to throw a game.

Prefacing the exhibition opening is the publication of an award-winning catalog with essays, Branding the American West: Paintings and Films, 1900-1950, edited by Marian Wardle and Stark Museum of Art Curator, Sarah E. Boehme.

According to Wardle and Boehme, Branding the American West: Paintings and Films, 1900-1950 developed as a collaborative project between two museums to share collections and expertise, resulting in a major exhibition and publication. It began with a concern about the best way to care for a collection of art. Brigham Young University Museum of Art in Provo, Utah and the Stark Museum of Art, in Orange, Texas came together through this shared interest.

Through this process, curators of the two museums visited facilities and shared information on their collections and research. Both museums share a strong interest in the art of the American West. As the curators explored convergences and differences in their respective collections, a plan grew to share the strengths. The two museums organized a scholar’s meeting to explore topics around the collections, and from that project grew the publication and exhibition, according to a press release.

“With the paintings paired with the film clips, a person can see the influence of film on art or art on film,” Boehme said.

A fully illustrated catalog of the exhibition, Branding the American West: Paintings and Films, 1900-1950, edited by Marian Wardle and Sarah E. Boehme and published by the University of Oklahoma Press, accompanies the exhibition. It includes essays by an interdisciplinary team of noted scholars from around the country.  This publication was awarded the Mountain Plains Museum Association Publication Design Award in the Books and Exhibition Catalogues category. Dr. Boehme accepted the award in Oklahoma City, Oklahoma in October of 2016.

The catalog is currently available for purchase at the Stark Museum of Art’s retail store for $39.95.