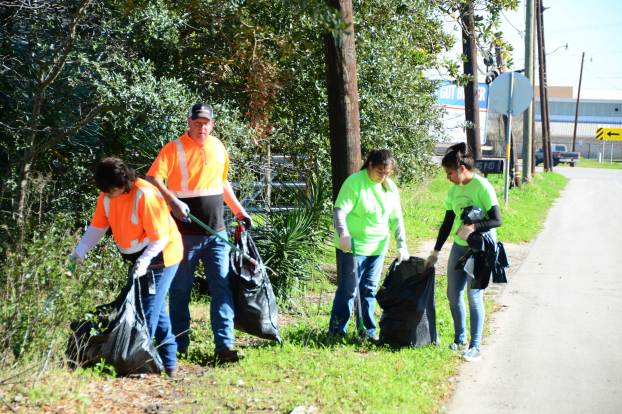 Photo courtesy of Shangri La Botanical Gardens and Nature Center Approximately 350 volunteers contributed their time to these clean up efforts during the Community Trash-Off. Nearly 200,000 pounds of trash over 20-plus years since the Community Trash Off began in 1995.

The 2017 Community Trash-Off was a huge success on Saturday, February 25th thanks to the support from volunteers throughout our community. Three 40 cubic yard dumpsters were filled with trash, 3500 pounds of scrap metal and 30 tires were also collected. Approximately 350 volunteers contributed their time to these clean up efforts. INVISTA was the presenting sponsor of the event and Granger Chevrolet graciously picked up the trash that was collected.

Rick Lewandowski, Director at Shangri La Botanical Gardens and Nature Center commented, “We are deeply grateful to everyone who showed their commitment to the quality of life in our region and came out to clean up the roads and waterways in the Orange and adjacent areas. We wanted to especially thank our Presenting Sponsor, INVISTA for its continued support and leadership. We are grateful to our friends at Granger Chevrolet who sent crews around town to pick up the many hundreds of bags of trash gathered by volunteers.”

We would also like to thank the following businesses for donating items for Trash-Off this year:

Community Trash Off began in 1995 with a small group of concerned citizens who joined forces to help clean trash out of Adam’s Bayou. That year paved the way for a community event that has steadily grown in scope. The Community Trash Off became a program of the Stark Foundation in 2002 when the planning for Shangri La was initiated. Today, Community Trash Off includes efforts to clean not only Adams Bayou, but also the Sabine River and the streets in Orange, Pinehurst, and West Orange.

Since inception of Community Trash Off, thousands of individuals have worked tirelessly to collect nearly 200,000 pounds of trash over 20-plus years. This one annual event brings the community together with a common cause to make Orange and surrounding municipalities beautiful.

Student of the Month

Ayson Simmons was recognized by the Greater Orange Area Chamber of Commerce as the Student of the Month. Ayson is... read more