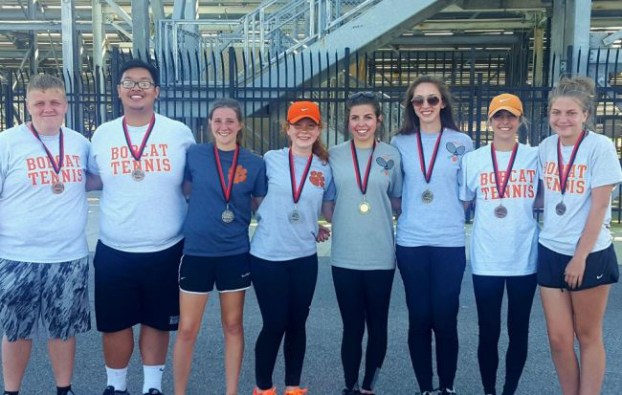 OF Tennis competes well in Mid-County

The Orangefield Tennis team participated in the Mid-County tournament this week. On Thursday, in the freshmen division, both Sarah Morrison and Cooper Lowe advanced to the quarterfinals in singles. Clayson Choate competed in the finals in the consolation bracket.   Christie Luong had a good run before taking a loss in the semifinal round of the JV girls’ singles. Boys’ doubles team, Cole Coulter and Hunter Gordy won the consolation to finish up Thursday’s competition.

The varsity team brought home several medals in Friday’s contest. Winning consolation were singles’ Jennifer Swift, Paris Fregia, and doubles’ Colby Childers and Kevin Nguyen. Mixed doubles’ Cameron Choate and Luke Truncale fell in the quarterfinal round while Evie Arceneaux and Dylan Williams advanced to the semifinals before being bested by Woodville. Both girls’ doubles were successful in their divisions. The team of Taylor Decker and Meagan Ibeck lost in a super tiebreaker to place second against Woodville. Abby Green and Ashlyn Turley brought home the gold with a win against Nederland in a super tiebreaker.

Orangefield will compete in the Kelly Invitational on March 9th and 10th.