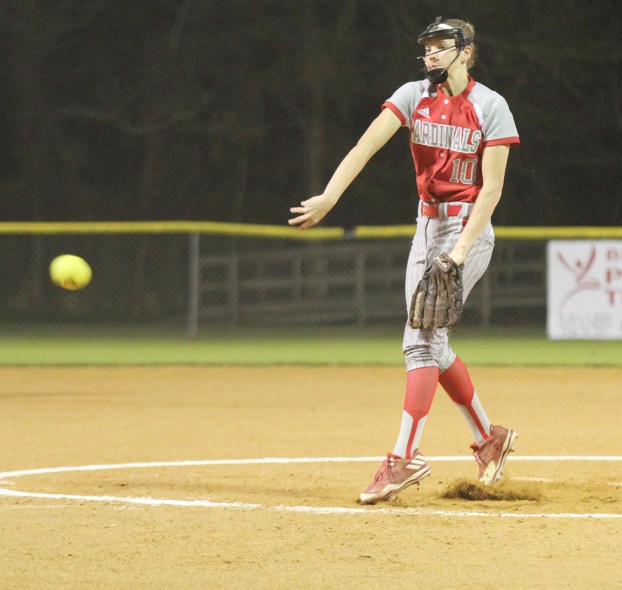 Wilbur tossed a complete-game shutout as she allowed just one hit while striking out 13 and walking just one.

Raylie Huff absorbed the loss on the hill for the Lady Hawks. She allowed seven hits while striking out four and walking two.

The Lady Cardinals (9-1) scratched in a run in the bottom of the first inning.
Caitlin Denison had a leadoff single to right centerfield and moved to second on a Abby Anderson groundout.
With two outs, Wilbur crushed a Huff offering to left for a single.
The Lady Hawks tried to pickoff Wilbur, who was speeding to second on the play and the ball got past second base as Denison sprinted in to score.
H-J’s Grace Phelps reached on an error to lead off the second, advanced to second on a one-out wild pitch but was left stranded as Wilbur struck out the side.
In the bottom of the second, Meagan Sourdelia reached on a H-J error to lead off. With two outs she went to second on a wild pitch and to third on a passed ball but was left stranded.
The Lady Cardinals snagged a pair of runs in the bottom of the third.
Denison got her second hit of the game when he hit a slow dribbler to third. She went to second on a super sacrifice bunt by Anderson and scored when Jaylynne Burch belted a RBI double to right.
Wilbur then drew a walk. Summer Black followed with a fielder’s choice as Burch was out at third. Wilbur eventually scored on a wild pitch.
Lady Hawk Phelps had a two-out infield hit in the top of the fourth but Wilbur fanned Summer Trahan.
In the top of the fifth, Lady Hawk Mackenzie Comeaux drew a leadoff walk and went to second on a sac bunt by Rachel Spacek. With two outs, Wilbur hit Ciara Blaisdell with a pitch to put two runners own but she struck out Caroline Spacek to end the threat.
In the bottom of the fifth, Denison led off and got tagged by a Huff pitch and went to second on another nice sac bunt by Anderson. Burch followed with a single to center but was thrown out at second as Denison advanced to third. After Wilbur walked, Denison was able to score on a passed ball. Wilbur made it 5-0 when she scored after Summer Black’s deep fly to right was dropped for an error.
In the bottom of the sixth for BC Aleah McClanahan and Natalie Reed had back to back singles and were left stranded.

The lady Cardinals will compete in the Liberty Tournament Thursday through Saturday.

By IC Murrell Port Arthur News NEDERLAND — The Nederland Independent School District board of trustees needed only a half-hour to... read more