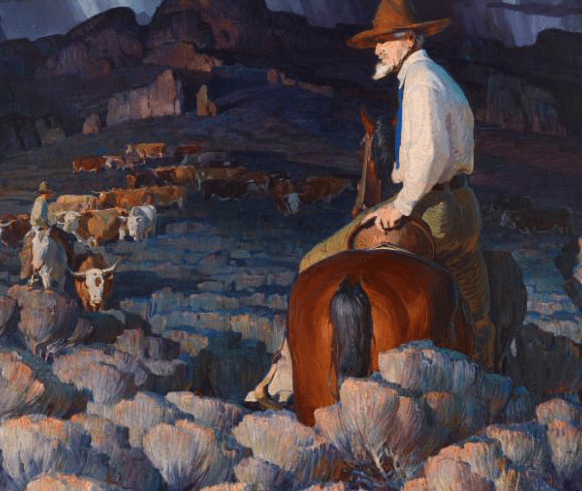 The Stark Museum of Art is preparing for one of the most significant exhibitions in its history, Branding the American West: Paintings and Films, 1900-1950, opening March 11, 2017and on view through September 9, 2017. Prefacing the exhibition opening is the publication of an award-winning catalog with essays, Branding the American West: Paintings and Films, 1900-1950, edited by Marian Wardle and Stark Museum of Art Curator, Sarah E. Boehme.

According to Wardle and Boehme, Branding the American West: Paintings and Films, 1900-1950 developed as a collaborative project between two museums to share collections and expertise, resulting in a major exhibition and publication. It began with a concern about the best way to care for a collection of art. Brigham Young University Museum of Art in Provo, Utah and the Stark Museum of Art, in Orange, Texas came together through this shared interest.

Through this process, curators of the two museums visited facilities and shared information on their collections and research. Both museums share a strong interest in the art of the American West. As the curators explored convergences and differences in their respective collections, a plan grew to share the strengths. The two museums organized a scholar’s meeting to explore topics around the collections, and from that project grew the publication and exhibition.

Branding the American West: Paintings and Films, 1900-1950 is an exhibition which focuses on artists and filmmakers in the early twentieth century who reshaped the vision of the American West. Specifically, this exhibition is the first to examine collectively the imaging of the American West by members of the Taos Society of Artists and the California-based artist, Maynard Dixon. Itshowcases works from the first half of the twentieth century portraying images of the landscape, people and environment of a West immersed in change. These pieces both enhance and contradict the narrow representation of the West at the beginning of the twentieth century as a place of violence and action.

Although the frontier was pronounced “gone” one hundred twenty years ago by historian Frederick Jackson Turner, the Western American frontier was by that time indelibly embedded in the public consciousness in America and abroad. Artists including painters, sculptors, writers, musicians and filmmakers have perpetuated a vision of the West that has lived on in the world imagination into the twenty-first century.

The exhibition will showcase masterworks from the exceptional but seldom-seen collection of Taos-school paintings from the Collection of the Stark Museum and little-know paintings from BYU’s excellent Maynard Dixon holdings. “This is the first and probably only time these works will appear together,” said Marian Wardle, Curator of American Art at the BYU Museum of Art.

Sarah Boehme, Curator at the Stark Museum of Art, said, “For those who interact often with our collections, this exhibition will bring works of art that are new to them, both from the BYU Museum of Art and from works in the Stark collection that have not been exhibited recently. Those works, along with the interpretation of the exhibition, will provide a new way of seeing some familiar works of art.”

Also, Western films and promotional pieces present popular imagery as part of the exhibition. Selected examples of Western art by other artists, such as Frederic Remington and N.C. Wyeth, will enhance the exhibition through contrasts of approach. The works portray the communities and cultures of the West in influential ways and reveal how the changing economics and demographics of the region played into Western imagery. They reframe the West of popular consumption at home and abroad and ultimately show the beauty, violence, contradictions and progress of America’s most beguiling region.

The exhibition appeared first at Brigham Young University Museum of Art February 19 to August 13, 2016, traveled to the Chrysler Museum of Art in Norfolk, Virginia for display from October 29, 2016 to February 5, 2017, and will open at the Stark Museum of Art on March 11, 2017 and continue through September 9, 2017.

The exhibition Branding the American West: Paintings and Films, 1900-1950 is organized by the Brigham Young University Museum of Art and the Stark Museum of Art, and made possible in part by the generosity of the Nelda C. and H. J. Lutcher Stark Foundation, the Charles Redd Center for Western Studies, the Utah Division of Arts and Museums, and the George S. and Dolores DoréEccles Foundation.

A fully illustrated catalog of the exhibition, Branding the American West: Paintings and Films, 1900-1950, edited by Marian Wardle and Sarah E. Boehme and published by the University of Oklahoma Press, accompanies the exhibition. It includes essays by an interdisciplinary team of noted scholars from around the country.  This publication was awarded the Mountain Plains Museum Association Publication Design Award in the Books and Exhibition Catalogues category. Dr. Boehme accepted the award in Oklahoma City, Oklahoma in October of 2016.

The catalog is currently available for purchase at the Stark Museum of Art’s retail store for $39.95.

One of the largest and best-attended art museums in the Mountain West, the BYU Museum of Art offers a dynamic exhibition schedule that includes displays of its permanent collection, world-class traveling shows and thought-provoking exhibitions organized by museum curators. One of the museum’s most important roles is its contribution to the academic mission of Brigham Young University. From the research and study of the artworks in the permanent collection, to the teaching and learning that occurs in classrooms and galleries, the museum plays an important role in the academic pursuits of many students at BYU. Concurrently, the museum seeks to connect to broad community audiences through its exhibitions and educational programming.