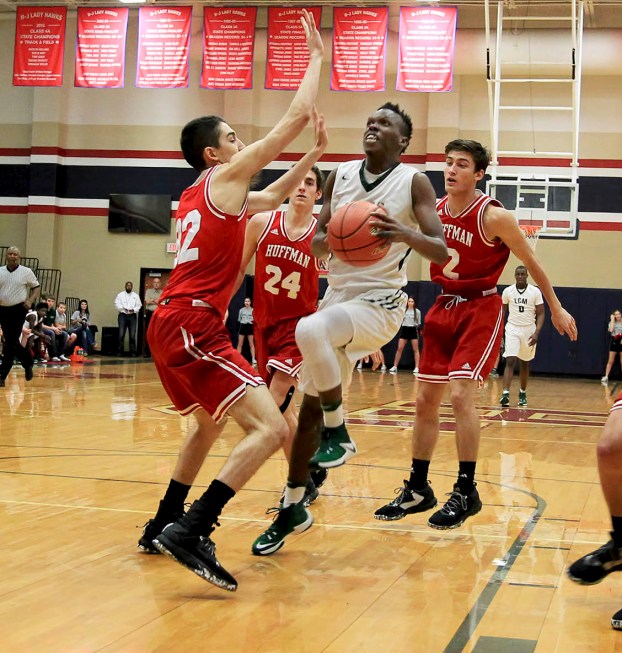 Leader Photo by Mark Pachuca LC-M's Ayson Simmons drives in the paint against Huffman Friday night in the area round of the playoffs.

Falcons edge past Bears in area round

SOUR LAKE – For the second straight season the Huffman Falcons ended the season for the Little Cypress-Mauriceville Bears as the Falcons escaped with a 61-54 Class 4A Region III area round victory Friday night at Hawks Gym at Hardin-Jefferson High School.
The Falcons (29-5) handed the Bears (23-13) a 62-49 defeat in the playoffs last year and also defeated the Bears 68-56 at the H-J Marathon in early December.
The Bears didn’t go down without a fight though.
The Falcons built a 52-40 edge with 3:20 remaining only to watch the Bears scrap back to get to within three at 56-53 after standout LC-M guard Ayson Simmons sank two free-throws with 0:50 left.
Huffman’s Luke Bailey missed the front end of a one-in-one but the Bears failed on a layup inside.
LC-M fouled Huffman standout Dillon Todd, who comfortably drilled two free throws to push it to 58-53.
The Bears missed a three-point attempt trying to pull to within two and the Falcons were able to can 3-of-4 from the charity stripe to seal it.
Todd powered the Falcon arsenal with a game-high 22 points and a team-high six rebounds.
Will Johnson tallied 13 points for the Falcons and nailed three three-pointers. Darius Dugas finished with 11 points while Noah Pendergrass chimed in with seven points and five boards.
Simmons wrapped up a superb year by leading the Bears in scoring again as he poured in 15 points and he went 8-of-9 from the free-throw line.
Katon Brown finished with 12 points and eight rebounds. Jacolven Provost contributed eight points and a game-high 12 rebounds. Braden Bridges had nine points coming on three three-pointers while Keegan Sonnier connected for six points on two treys.
The Bears led 17-13 at the end of the first period as Bridges and Sonnier combined for three three-pointer while Provost had four points. Dugas had five points for the Falcons in the quarter.
The Falcons outscored the Bears 13-7 in the second period to snag a 26-24 edge at the half.
The Bears, behind the effort of Simmons, opened the third period with a 9-2 spurt to go up 33-28 with 5:20 in the quarter. Simmons tallied eight points in the quarter.
However, Johnson lifted the Falcons to a 14-4 run to finish the quarter as he buried two three-pointers as the Falcons led 42-37 heading to the fourth.
Todd took over for the Falcons in the fourth as he piled up 13 points with three field goals while going 7-of-8 from the line.
The Bears finished with a 24-21 rebounding edge. LC-M had 14 turnovers while the Falcons had just eight.
Huffman finished 16-of-23 from the charity stripe while the Bears went 10-of-14.
The Falcons will move on to face Houston Yates in the regional quarterfinals. Yates defeated Diboll 119-60 in the area round.

The Orangefield Bobcats took down the Buna Cougars 11-0 Friday to capture their first game of the season. Ryon Stubblefield... read more