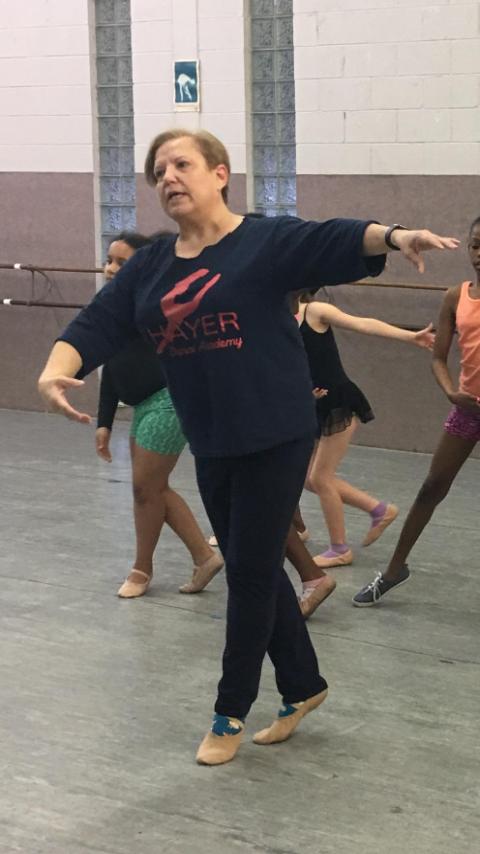 Journeying all over the USA, taking photographs of children while they were working in the USO, since silver was a high commodity in 1942, Christine Cinnone Yocum and husband, Floyd Henry Yocum, finally chose to settle in Orange, Texas, where jobs were plentiful, unlike towns in their home state of Pennsylvania.

They opened what was then called “816 MM Headquarters,” later becoming Yocum Photo Center, a thriving business for 55 years, originally located in the Cove.

The Yocums began their business by showing cartoons and movies, a hit with most citizens. They had two children in Orange, a boy and a girl, half Pennsylvania Dutch/German and half Italian, “Skipper” and Rose.

Skipper, who earned a PhD. in Chemical Engineering from Tulane, worked for Dupont and Shell in New Orleans. He currently resides in Florida.

Rose, now 63, still resides in Orange, is known as Rose Yocum Thayer, and most widely known for her dance studio, Rose Thayer Academy of Dance, which she operated for 33 years. She sold her businesses in 2015 to middle daughter, Christi Thayer Kovatch, and her husband, Chris.

By then, Rose had acquired a second studio in Orangefield. However, Rose insists she is not retired, as she still teaches some dance classes, owns TruColors (a custom t-shirt shop), paints vivid art, and makes jewelry, soaps and deodorants without impurities, candles, ink pens, ceramics, sews, and even serves as a Certified Trainer for AFFA (Aerobic and Fitness Association of America). One of Rose’s well-known former local clients was Mary Louise McKee. Rose has packed a lot of living in her years! Now, let’s explore that life . . .

Reared in Orange, Rose took Art from Jim Bacchus at West Orange High School and Dance from Mary Alice Callahan, founder of Ingram School of Dance. Rose met her future husband, Kenneth “Ken” Thayer while in high school at the then local bowling alley, where the former Welch’s Furniture was located until recently, and it was “love at first sight!” Rose graduated from West Orange in 1972, while Ken graduated from Lutcher Stark High. Both attended Lamar University, with Rose majoring in Art and changing to Dance, while being a member of the Lamar Dance Company, and Ken majoring in Elementary Education. They married in 1973, when Rose was only 19, and Ken soon obtained a job in Houston as a teacher. Rose then transferred to the University of Houston, continuing her collegiate education, this time with specializations in both Art and Dance, eventually receiving a BFA.

Rose worked her way through college by teaching dance various places. She even had a job painting bill boards with Foster and Klizer Outside Advertising. It was in this job that she learned most of her oil painting skills.

For four years, the young couple had no children, as they both worked diligently at their jobs and education. Some years later, Ken took over the family business, Yocum Photo Center, after he and Rose had already moved back to Orange, and moved the store to the current 16th Street location.

When the kids began arriving, Rose worked for Mary Alice Callahan teaching dance, and she was a free-lance sign company artist. It was not long, though, until dance ruled Rose’s life.

All three daughters graduated from West Orange-Stark High School and have earned college degrees, as have their spouses. Rose is blessed with a total of eight grandchildren, plus a few grand dogs.

Unfortunately, Rose was widowed on Feb. 11, 2010, when Ken passed away due to Light Chain Deposition Disease, a very rare immune system disease where the immune cells work in reverse, eventually clogging all organs in the body. According to Rose, it took many hospital visits to Beaumont, Houston, and Little Rock, Arkansas to determine that Ken needed new cells from his own bone marrow after all his immune system cells were killed.

Initially, Ken was administered chemotherapy at M.D. Anderson Hospital in Houston, without cancer, due to his extremely rare condition. It was a hospital staff infection, however, in Little Rock, that ended his life. Ken was an ID Technician under Chief Sam Kittrell at the Orange Police Dept. He was the first person to work at OPD who was not a licensed police officer.

Ken was extremely active in the community with the Orange Lion’s Club, heading the operation and maintenance of the merry-go-round ride. Rose assisted several times by using her art skills to repaint the horses on the ride.

“I think that Ken being in the water so much to photograph after Hurricane Ike, led to his ultimate illness,” Rose said.

The storm called Rita left more tragic scars for Rose, as her mother was placed on a school bus as an Alzheimer’s evacuee from a local nursing home, not to be located by Rose for over two weeks. Since Christine Yocum Woolley had no memory, she could not recall whether she had eaten, resulting in literally “being starved to death,” according to Rose. Christine was finally located by Rose in the most horrific of conditions, passing soon afterwards.

On a happier note, Rose is expanding her shop, TruColors, moving next door in the location that housed Romano’s Italian Restaurant. Actually, the family owns the entire strip center housing Thayer Dance Academy, TruColors, and an insurance agency. This endeavor will enable Rose to make, display, and sell all her artistic works, as mentioned previously. The expansion should be completed in two to three months. Perhaps, some of her former students such as Jessica Rush, Broadway star in “Jersey Boys,” and Dustin Crumbaugh, Big Muddy Dance Co. star in St. Louis, will make a visit for the grand opening!

Texas Red Flashers met at the Garden District on Hwy 87. In Orange for their monthly meeting and celebrated Valentine’s... read more