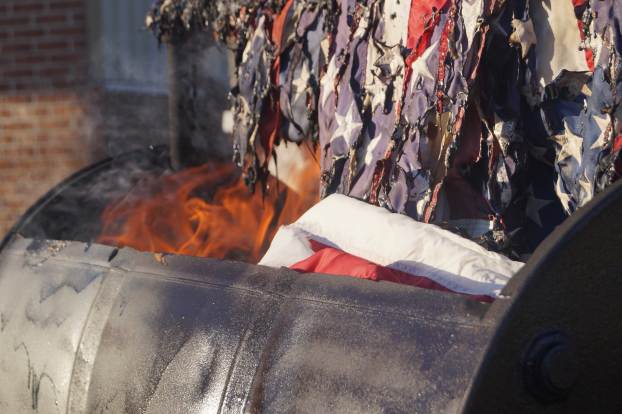 Randy Strong/The Orange Leader American Legion Lloyd Grubbs Post 49 held a flag retiring ceremony Thursday evening. The ceremony is to encourage proper respect for the Flag of the United States and to provide for disposal of unserviceable flags in a dignified manner.

Retirement of the American flag ceremony was held Thursday at the American Legion Lloyd Grubbs Post 49 located on Green Avenue in Orange.

Members of Post 49 presented a number of unserviceable flags of our country for inspection and disposal.

After determining that the flags had become faded and worn in service of symbolism to our freedom and in honoring our fallen soldiers of all past Wars of our great nation the flags were given one last inspection before being properly retired.

Following the ceremony Orange County Judge Stephen Brint Carlton gave an astounding account of his time in the Air Force focusing on the significance of honor and respect.

“The American Flag represents a living country and itself  considered a living thing,” Carlton said. “When the flag is no longer a fitting emblem for display it should be destroyed in a solemn and dignified ceremonial way.”

A set of rules of civilian flag courtesy popularly known as the Flag Code was first formulated by the National Flag Conference meeting in Washington, June 14-15, 1923. The Flag Code was an attempt by prominent patriotic organizations to collect together in one instrument statutes, executive orders, and rules of established custom and usage relating to the U.S. flag. On Dec. 22, 1942, the 77th Congress approved Public Law 829, giving official sanction to most of the provisions of the Flag Code, according to the National American Legion official website.