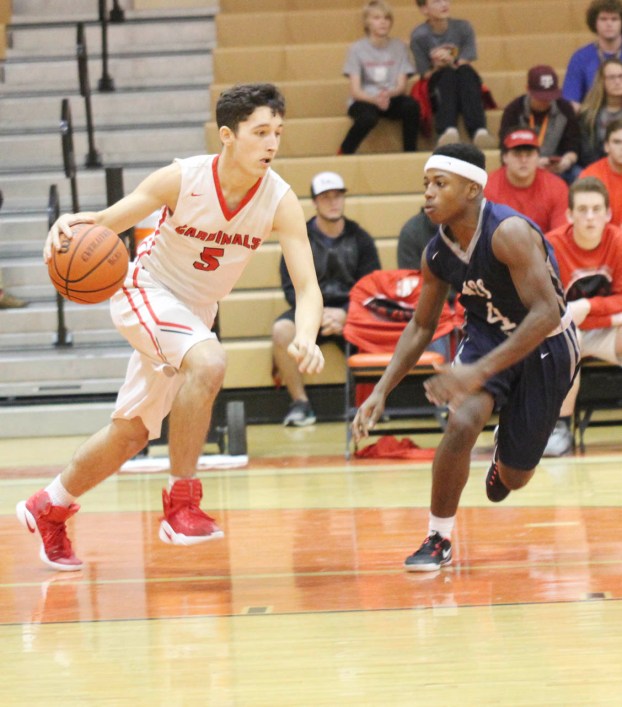 ORANGEFIELD – Getting off to a great start and never looking back, the West Orange-Stark Mustangs easily cruised past the Bridge City Cardinals 69-42 Friday night at Bobcat Gym to earn the third-place playoff seed out of District 22-4A.

The two teams split during the district season but it was the Mustangs (11-15) that controlled the game Tuesday night against the Cardinals (15-12), who will enter the playoffs as the fourth-place team.

The Mustangs jumped on the Cardinals with a 20-9 run in the first quarter and led 29-20 at intermission.

A big 22-9 spurt in the third quarter sealed the deal for the Mustangs.

Post Dane Piper did his best to keep the Cardinals in it as he muscled his way in the paint for 17 points while also snagging a team-high seven rebounds.

Justyn Romero had nine points and five boards for the Cardinals.

The Mustang defense forced the Cardinals into 25 turnovers and held Bridge City guards Brandon Vela and Max Baker to four points with Baker scoring the four.

Six different Mustangs scored in the first quarter with Miller scoring six of his points in the period.

Piper and Romero combined for all nine of BC’s points.

The Cardinals were able to narrow the gap to just nine in the second quarter.

However, the Mustangs broke it open with the first 10 points of the third quarter. As White and Skinner teamed up for 14 points, scoring seven points each. Piper had six for the Cardinals in the period.

WO-S outscored the Cardinals 18-13 in the fourth quarter. Mathews had nine points in the quarter, including a pair of treys.

The Mustangs finished with a 27-22 rebounding edge. WO-S had just 14 turnovers. The Mustangs went 7-of-10 from the free-throw line while the Cardinals made 12-of-23.

The Cardinals will face 21-4A champion Shepherd in the bidistrict round of the 4A Region III playoffs next week.

The Mustangs will play a waiting game as Diboll, Huntington and Lufkin Hudson tied for the second-place in 21-4A and are breaking a tie last night and today to determine their seeding.

Lifters fare well in both BC and OF meets