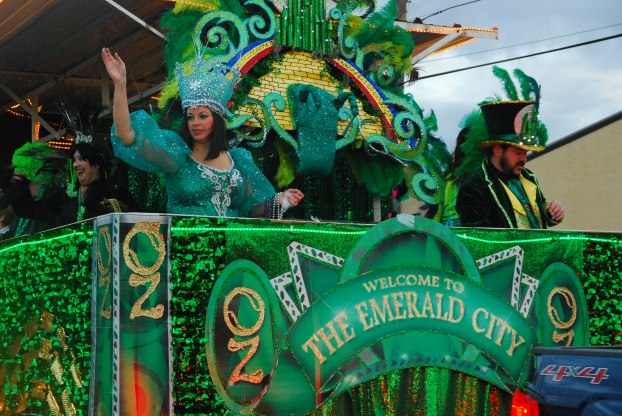 Orange Leader file photo The 14th Annual Mardi Gras Krewe of Krewe’s Grand Parade and concerts are Saturday in downtown Orange. See Wednesday’s edition of The Orange Leader for maps of the parade routes and more information on the festivities.

It’s a party is the theme for the 14th Annual Mardi Gras Krewe of Krewe’s Grand Parade and concerts on Saturday in downtown Orange.

The annual event hosted by the Greater Orange Area Chamber of Commerce in partnership with the City of Orange Convention and Visitors Bureau will include a Munchkin Parade this year as well as two concerts.

A Munchkin Parade is scheduled for 1 p.m. The staging area is at the City of Orange Library. Immediately following the parade will be musical entertainment by Donnie Broussard and Louisiana Stars from 2 p.m. – 4 p.m. at the Riverfront Boardwalk and Pavilion.

“At least 60 children have registered for the Munchkin parade,” Chamber President Ida Schossow said.
The Krewe of Krewe’s Grande Parade will begin at 5:30 p.m. followed by live entertainment by the Bernie Alan Band from 7 p.m. – 9 p.m., also at the Pavilion.

Food, drink, and adult beverage vendors will be on site. No dogs, pets, or coolers will be allowed at the Riverfront Boardwalk and Pavilion.

Bill Klein, member of the Kiwanis Club of Orange, Texas, has received the Legion of Honor Award for his 36... read more