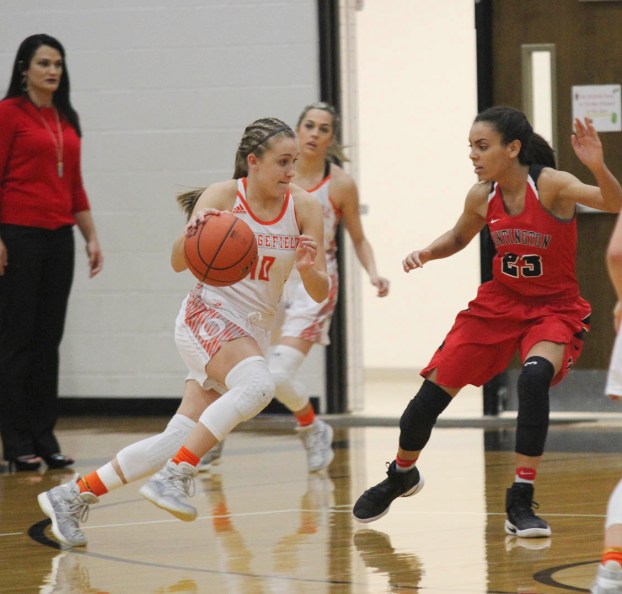 WOODVILLE – Getting a double-double from strong forward Tatum Williams and strong point guard play from Grace Martin, the Huntington Devilettes edged past the Orangefield Lady Bobcats 54-49 in Class 4A Region III bidistrict playoff action at Eagle Gym Tuesday night.
Williams filtered in 20 points and grabbed 10 rebounds while Martin ran the show with 14 points and dished off eight assists as Huntington (17-14), the third-place team out of 21-4A, downed the 22-4A runnerup Lady Bobcats (20-12).
The Lady Bobcats took a 25-24 into intermission but the Devilettes started to dictate play in the third quarter and were able to hold on in a free-throw battle in the fourth quarter.
Huntington grabbed a 35-30 lead early in the third on a pair of baskets by Micayla Howard. Howard finished with 11 points but fouled out with 6:26 remaining.
Orangefield freshman Faith Fregia, who led the Lady Bobcats with 14 points, hit a three-pointer and senior Paris Fregia tied it at 35-35 with a running jumper.
Martin hit one free-throw to give Huntington the 36-35 lead going to the fourth.
The Lady Devilettes went on a 5-0 run to grab a 45-38 edge with 2:42 left.
Orangefield got to within 47-43 with a Cameron Choate free-throw with 0:55 left but Huntington was able to survive some tough charity shooting.
In the fourth quarter the Lady Bobcats went just 7-of-15 from the free-throw line while Huntington was just 12-of-23.
The Lady Bobcats finished 17-of-27 from the line while Huntington went 27-of-42.
Choate finished with seven points and seven boards. Paris Fregia had seven points and five rebounds. Evie Arceneaux had six points and Jayme Deutsch collected six rebounds.
Huntington finished with a 36-32 rebounding edge.
Orangefield finished with 18 turnovers while the Lady Devilettes had just 11.
Cora Ray contributed seven rebounds for the Huntington arsenal while Jenna Flourney had five boards.
The Lady Bobcats led 9-8 after defensive struggle in the first quarter.
The Fregias combined for 10 points in the second quarter while Williams tallied nine first-half points for Huntington.

In other playoff action Tuesday night, the Little Cypress-Mauriceville Lady Bears fell to Diboll 57-37 in Kountze.

Mauriceville’s Jack Burke, despite battling some brutal 20+ mph wind conditions … shot a 73 on Friday and followed it... read more