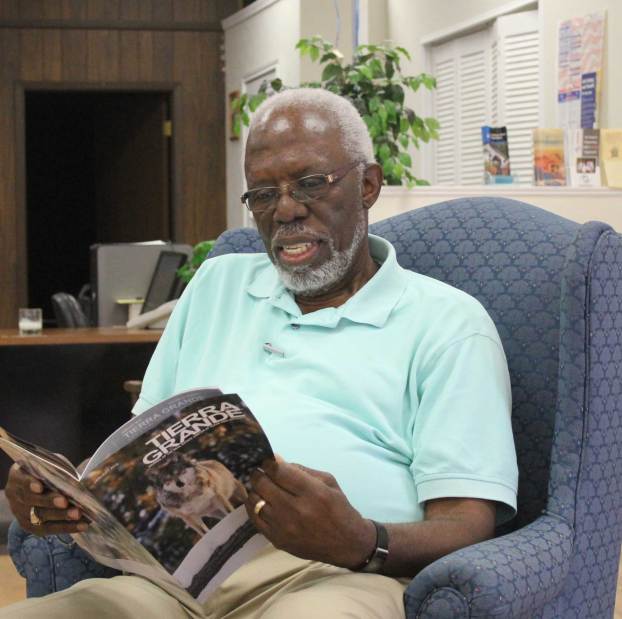 Orange was looking for Allen

Hughie J. Allen, 77, was attending SFA and working in Lufkin when a West Orange Stark principal told him the district was looking for people like him.

The decision to apply for a position in Orange lead to a career until he retired in 1998.

Allen has been a part of the Orange community since 1974 when he was hired as Assistant Principal at then West Orange Junior High.

“Everyone was phenomenal during the interview process,” Allen said. “It is why I decided to come to Orange.”

Six years later, Allen was selected as principal. In 1983, he was named Personal Director for the district.

“The last four years, I was Liaison for the district,” Allen said.

Allen has seen the changes in Orange over the years.

“Sears was booming and Orange was a flourishing city,” Allen said. “Everything was jumping.”

At the time, according to Allen, the shipyards were starting to shut down. The same shipyards which brought thousands to Orange in the 1940s.

“The naval base was starting to dwindle,” Allen said. “Housing, people, everything has been dwindling.”

Allen hopes the new construction on the interstate helps the area grow again.

“The hospital closing is a black eye for the area,” Allen said.

When Allen was asked what he enjoys most about Orange and his career he quickly responded with the football games.

“I enjoyed seeing the band,” Allen said. “Back then, we had a gigantic band. My children were in the band and we enjoyed the educational tours. There was an excellent choir as well.”

Allen also said he enjoys the people of Orange.

“Back in 1973, I took a real estate course,” Allen said. “Over the years, real estate has become more and more demanding and intricate to the systems to cooperate.”

He has also served on several committees and boards over the years.

“Honestly, it is too many to remember,” Allen said.

“It is important to serve the community,” Allen said. “It provides another view of the city, the people and who you are working with.”

When Allen does slow down to relax, he enjoys barbequing and helping others.

“Do well in school and as you go out in the world, secure a place , an occupation that offers permanency,” Allen said when asked what advice he would give to a younger generation. “You also have to be flexible. It is the key to wherever you need to go.”