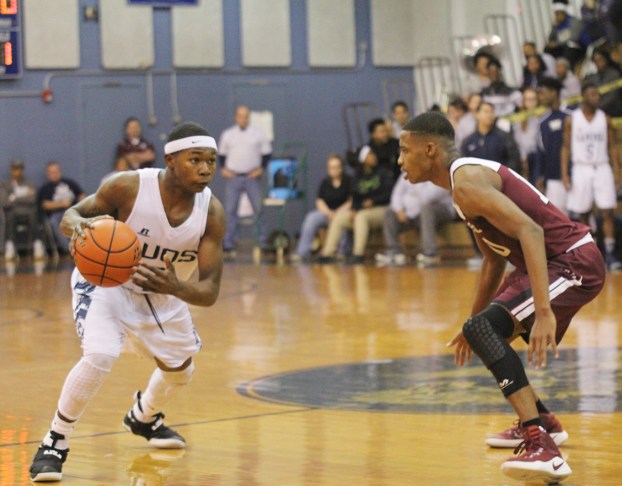 WEST ORANGE — They pushed the top-ranked Silsbee Tigers hard but the West Orange-Stark Mustangs simply ran out of gas down the stretch.

However, the Tigers and their full-court press finally wore down the Mustangs as Silsbee finished the game out with a 48-24 spurt in the final 10:52 to notch a 103-78 District 22-4A victory at Mustang Gym in front of a packed house.

Turnovers and fouls hampered the Mustangs (10-13, 5-4) throughout the night. Silsbee (26-5, 9-0) forced the Mustangs into 35 turnovers. There were 58 fouls in a game that was called tight but the Mustangs were whistled for 35 of them.

Silsbee shot a whopping 53 free-throws, converting 32 of them. Meanwhile the Mustangs made just 14-of-25.

The Mustangs led 17-16 at the end of the first period but the Tiger combination of Braylon Bush and Trajan Harris was too much in the second period.

The Mustangs fought back, scoring the first nine points of the third period, led by post Terron Brown, who had six in the run. Brown finished with a double-double with 11 points and 12 rebounds.

A Cory Skinner bucket pulled the Mustangs within one at 55-54 but the Tigers held on, finishing the quarter with a 12-6 surge.

The Tigers then put the game away by tallying 12 of the first 14 points in the fourth quarter as Bush and fellow guard Bruce Newton teamed up for 22 points in the period, mainly off of steals and hard drives in the lane against the tired Mustangs.

Newton had 12 points for the Tigers.

Kalon Barnes had a double-double for the Tigers, scoring 14 points while snagging 12 boards while Willie Jones filtered n 13 points and grabbed six rebounds.

Jay’len Mathews led the Mustangs with 14 points as he had two treys and five rebounds.

Tarik Riley had 10 points and seven rebounds for the Mustangs while Malick Phillips contributed nine points and six boards.

The Mustangs finished with a 47-36 rebounding edge. Silsbee wound up with 17 turnovers.

The Mustangs, still in third-place in the 22-4A standings, will visit LC-M Tuesday while the Tigers return home to face Bridge City.

By Caleb Adams Leader Correspondent BRIDGE CITY — The Bridge City Cardinals edged out a 38-37 win against the Orangefield... read more