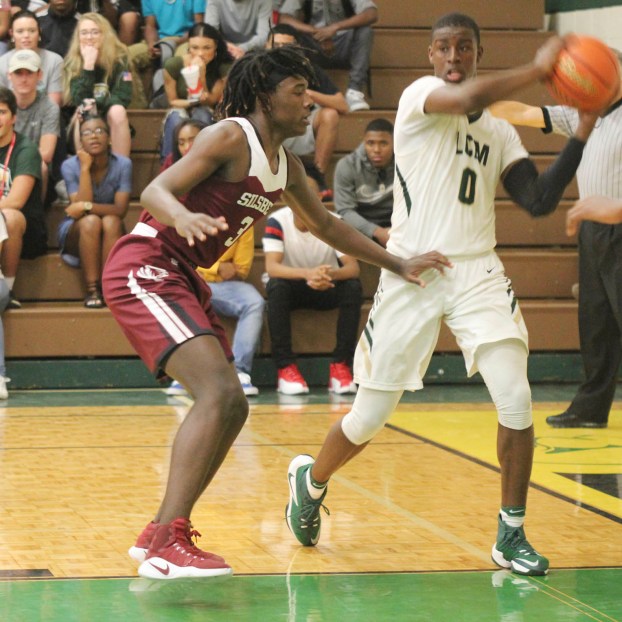 LITTLE CYPRESS – A battle between the top two teams in the District 22-4A basketball race came to an ugly conclusion Tuesday night at The Bear Cave.

First-place and Class 4A No. 1 state-ranked Silsbee led the Little Cypress-Mauriceville Bears 42-28 with 2:32 remaining in the first half when chaos developed.

At least three to four players were delivering punches on the Tigers’ offensive end, punches that certainly landed for both teams.

After that point, it was literally “free game” as both benches cleared and entered the court as little pockets across the gym almost had melees.

Even the fans, including some worried parents, entered the court to either help break up the fray or try to start more trouble.

“It will go down as 2-0 win in the books for Silsbee according to the district rule book,” said LC-M coach Brad Jeffcoat. “It’s a very unfortunate situation for everyone involved and I’m sure there could be some repercussions. According to the rules, both benches cleared, therefore meaning that no player was eligible the rest of the way.”

The district and the University Interscholastic League will certainly be investigating the incident. Several players could also miss the next game and possibly more once decisions are implemented.

Fans were asked to calmly leave the gym when both teams went back to their locker rooms. The Silsbee team did not leave into the facility was cleared.

The Bears were holding their own against the top-ranked Tigers throughout much of the half after Silsbee downed LC-M 99-39 at the Tiger Den in the first half of district play.

Point guard Ayson Simmons was cutting through the Tiger defense like butter in the early going and finished with a game-high 14 points, including nine in the first quarter.

The Bears led 15-14 at one point in the first period, but the Tigers, got hot from three-point land, especially Trajan Harris.

The Tigers were on a 16-7 spurt in the second quarter before the chaos erupted.

Jordyn Adams had 12 points for the Tigers and three rebounds while Devon McCain added six points.

Braden Bridges finished with five points for the Bears while Christian Weatherly had four points and a game-high six rebounds.

Both teams finished with 10 rebounds.

The Bears had 13 turnovers while the Tigers had five.

The Bears will host last-place Hamshire-Fannett Friday while the Tigers visit West Orange-Stark.