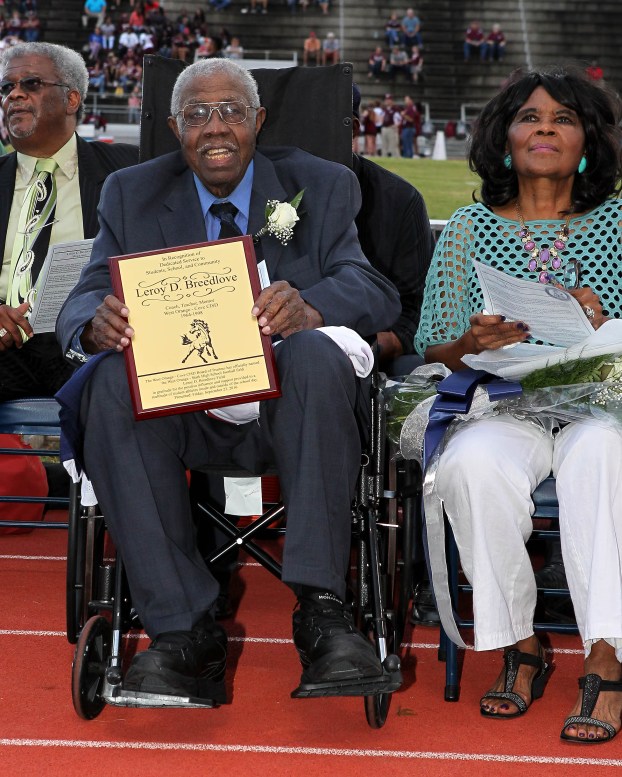 A Legend is gone.

Leroy Breedlove was born in Muskogee in 1930. His parents were Leon and Ann Breedlove. He attended high school at Sumner High School in Kansas City, Kansas, participating in all sports. As a high school track athlete, he owned the fastest 440 time in Kansas which earned him a scholarship to Texas Southern University in Houston. There, Breedlove played football, basketball, baseball, and ran track.

Following his freshman year he joined the Kansas City Monarchs of the Negro League and played professional baseball with Hall of Fame greats such as Satchel Paige and Ernie Banks. When returning to TSU, Breedlove became an All-American in Basketball and served as a captain of the basketball and baseball teams. He graduated with a degree in Physical education and a minor in mathematics.

He began his Texas teaching career in Rosebud Texas in 1954. After Rosebud he taught at Odessa Texas, and that lead him to become a teacher at M.B North High School in Orange, Texas in 1964.

“That was around the time they wanted to integrate the schools,” Breedlove said in an interview. “After they integrated, they fired all the black coaches and most of the teachers. Someone asked well who is going to coach all these black children? So they chose me because I was very familiar with these kids.

What followed is one of the greatest relationships between athletes and a coach.

Breedlove was more than a coach. He was a teacher, father figure, and a mentor to so many people he has come in contact with. He called his students “his children,” and up until his passing he would still get phone calls and hold hour long conversations with his former students. They all remember how he treated them with kindness and tough love.

From coaching track and field, football and both boys and girls basketball, he is known simply as Coach.

His size 13 Converse shoe is still a topic of laughter and great stories from the past students.

“I hear a lot about my ways of discipline back then, but they come to me now and say thank you as they laugh about it” said Breedlove during another interview.

One parent told Breedlove “When she leave home her name becomes Breedlove, and when she come back home her name comes back to me so you take care of her!”

He got the respect of a parent and demanded that they understood his love for them. The Mustangs, that we know of today, would not be the way they are if it was not for Breedlove. He laid the foundation for all the former football players to be ready and prepared for what was coming to them in high school.

As a middle school coach, he taught his kids how to listen and behave. By the time they got to high school, they already had to tools to become champions on and off the field.

“He taught us how to be men before we became men,” says Brian “Chop” Muhammad.

There have been many accolades presented to Breedlove over the years. Some, he would be so humble to accept and others he would shy away from, but in 2016 he received one of his greatest honors – the West Orange Stark high school football field was named after him.

“I’m so honored and humbled to have this field named after me,” Breedlove said at the dedication. “I tell you now just as I’ve said before, it’s not about me it’s about you my children.”

He was also recently honored with the King Impact award at the 2017 MLK Gala.

His impact is the stuff of legends. No matter the decade his love and support is always shown throughout his many stops.

Of course, anyone who knows coach Breedlove will tell you he is joined by his side with an amazing woman; his wife.

Breedlove will be survived by Mary Breedlove, his wife. A former teacher and the love of his life.

“I was still kind of young and I saw her one day and that was it. I knew it the first time I saw her” says Breedlove in a previous interview.

She has been his rock as he has dealt with health issues over the past years. His children are Leroy, Renay, Ann, Christina, Venessa, Rusty, Brenda (deceased).

In an interview he was asked if you could ask the Lord one question when you meet him what would you say? “I would ask him please let me see my children again,” said Breedlove. “Because I love them so much.”

By Eric Williams The Orange Leader Man suffered third degree burns in a house fire on Wednesday afternoon at the... read more