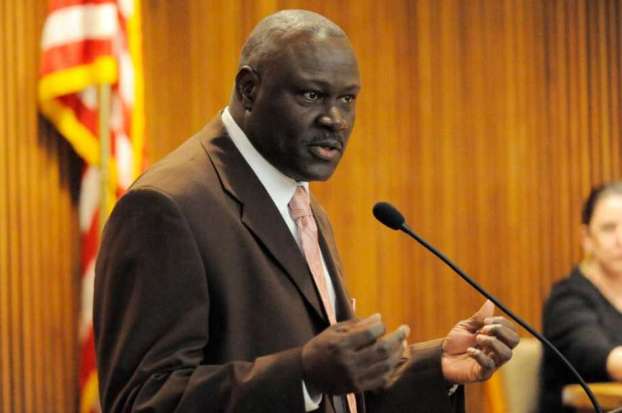 A Jefferson County Justice of the Peace was wounded and managed to return fire in a shooting Tuesday night in Houston.

Jefferson County Precinct 8 Judge Tom Gillam III, pastor at Apostolic Church-Jesus Christ located at 1702 North 10th Street in Orange, was wounded in the mouth by either a bullet fragment or some other debris or shrapnel according to the Houston Police Department.

Police say he was taken to Memorial Hermann Hospital but by late Wednesday afternoon he was no longer listed at the hospital.

Gillam told police he was driving his Mercedes Benz in the 7000 block of MLK Blvd near Doolittle Blvd when he pulled over to answer his phone.

While on the phone a woman approached Gillam twice asking for money which he refused to give her police said. Gillam then noticed a person in a hooded coat in his rear view mirror approaching from behind and reaching for a weapon according to police.

Gillam, who was also armed, grabbed his own handgun  and when the suspect fired at him several times he returned fire police said.

He is unsure if he hit the suspect who fled the scene along with the woman who had been asking for money police said.

A passerby assisted Gillam who was losing consciousness before EMS arrived to transport him to the hospital police said.

Police do not have any suspects at this time.

Judge Gillam III was appointed to the bench in April 2004 after then Judge Thurman Bartie was removed according to the Jefferson County Clerk’s office.

Gillam then went on to be re-elected the clerk’s office said.

By Eric Williams The Orange Leader Man suffered third degree burns in a house fire on Wednesday afternoon at the... read more